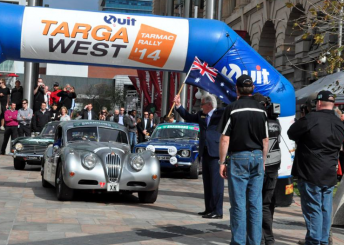 MEDIA RELEASE: Perth’s premier tarmac rally Quit Targa West has signed a sponsorship arrangement with Perth’s Mercedes-Benz dealerships (Diesel Motors & Westpoint Star) to showcase a selection of their high performance AMG vehicles at the 2015 event, which is held from August 13-16.

Car enthusiasts will get to view the rare high-power production AMG vehicles plus the 60 competitive rally vehicles a number of times including the Forrest Place Ceremonial Start on August 13, Northbridge Show ‘n’ Shine on August 14 and the City Sprint on August 16.

Rally spectators will also get to see the Mercedes-Benz GLA45 AMG 4MATIC and A45 AMG 4MATIC in action, when they are driven by professional drivers at the prelude of each of the 32 rally stages.

The association between the Mercedes-Benz Dealers and Targa West will expand in 2016 to include a new, one marque touring category, the Targa Tour, which will give AMG owners a controlled environment to take a spirited drive in their vehicles on some of Perth’s best roads.

“We are proud that Perth’s premier tarmac rally is associated with a brand that is such an innovator in the high-performance vehicle segment, and we look forward to seeing the partnership grow in 2016 into an exciting new category,” said Mr Tapper.

“The addition of the AMG vehicles at this year’s Quit Targa West will be a drawcard for enthusiasts.”
Diesel Motors and Westpoint Star Managing Director Jason Novatsis says the partnership will showcase the AMG vehicles in an environment which will highlight their high-level of driving performance.

“The AMG is synonymous with motorsport success. There is a considerable amount of technology and innovation crossover between the championship winning AMG motorsport vehicles and the AMG production vehicles,” said Mr Novatsis.

“We look forward to being able to demonstrate why the AMG brand has a reputation for delivering vehicles with a high-level of performance engineering.

“The Mercedes-Benz GLA45 AMG 4MATIC and A45 AMG 4MATIC  are just two of the feature vehicles that fans can expect to see at this year’s Quit Targa West. Both vehicles have a four-cylinder, turbocharged engine producing a powerful 265kw.”

AMG has a proud and successful history in top tier motorsport with numerous Formula 1® titles, including the World Constructors Championship in 2014, and being the most successful team to race in the German Touring Car Championship (DTM) with 160 race wins.