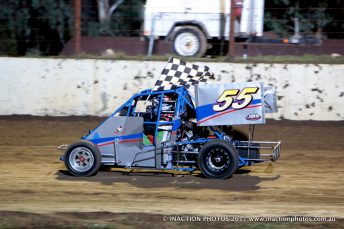 A massive twenty lap final with competitors clocked on Police Radar doing 145 to 150 kmph just as they buttoned off to make a full speed 80 metre sideways slide as they entered turn three. Perry got to the front a couple laps into the race and from there it was a game of catch me if you can for the others. Perry won from Florimell, Crawford, Paul Perry and Lisa Chalcraft.

Daniel McCarten blew the field away in the first heat of the night as he won after starting from last, he was soon to blow up his engine in the next round and his challenge was done. Ross Maclean won the second qualifier, Henderson, David Walton, Henderson and Maclean again were the heat race winners.

The title defence for Maclean was tough going in the final as he and Henderson did battle, only for a flat rear left tyre to curtail his determination to win. Henderson took the victory from Daniel Creek, James Powell, Brendan Brewer and Stuart Balins.

In Production Sedan racing the Bob Bailey Memorial honouring a former club President was won for the first time by racing mate Trevor Mills. Mills who this year won the Australian title after twenty five years of trying, only had to wait four years to win the ‘Bob’ as it is affectionately known after his son Jake won it the last two seasons.

Mills and Laidlaw quickly got passed Harrison at the drop of the green flag. Whilst the first two asserted themselves quickly Harrison was most definitely quickest of the rest. Rodney Anderson challenged him for a little while before breaking down and Mills and Laidlaw thrilled at the front as Laidlaw looked for a way up the inside of Mills to make a pass.

Mills took the win from Laidlaw, Harrison, Wayne Bourke and Jason Boardman to round out the top five.

Craig Cottier took a secure lead on the track championship points when he won the Sports Sedan final from Liam Powell, Tommy McDonald, Paul Allen and Fleur Heiner. In Junior Sedans Toby Carmichael won the final however in heat racing did not have things all his way after Ashleeh Bunt won two of the three heats. Bunt finished second to Carmichael in the final with Jake Cottier in third.

In Standard Saloon racing Warrick Howie the Victorian Champion drove his backup car to victory after his biggest challenger Scott Whittle decided not to risk his engine after losing oil pressure. Daryl Joosten finished second to Howie with Trevor Kuhne, Chris Fitzgerald and Micheal Fleming-Robertson rounding out the top five.

Next month, Wahgunyah Speedway will host the Howie Memorial for Standard Saloons and the New South Wales Modified Sedan title. Another great meeting not to be missed.