Peroni on the pace in Eurocup opener

Peroni on the pace in Eurocup opener 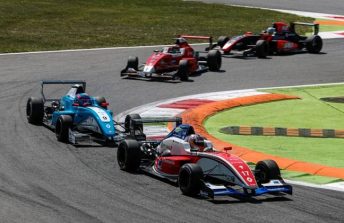 Tasmanian Alex Peroni has established himself as a contender for the 2017 Formula Renault Eurocup title after a promising performance in the opening round at Monza last weekend.

The 17 year-old Hobart driver was among the fastest drivers in Saturday’s first of two races at the legendary Italian racetrack.

He qualified fifth in the 30-strong international field, and held that position in the race until he was outjumped by experienced Belgian Max Defourny following the second of two Safety Cars.

Until then Peroni had put up a spirited defence against the 2016 Eurocup third placegetter.

At one point he drove side-by-side on the outside of Defourny around the high-speed Curva Grande, and outbraked him into the Della Roggia Chicane!

Nevertheless he was the highest-placed Eurocup debutant.

His fastest lap in the 15-minute session was affected by a full course caution for another driver’s incident. Consequently he started the race from 14th position.

An early-race clash with Portuguese Henrique Chaves eliminated both drivers.

Peroni is ninth in the Eurocup pointscore despite finishing only one of the two races.

He’s confident that he can be competitive in the remaining nine rounds of the one-make Eurocup series, which has been a stepping-stone to Formula 1 for nearly three decades.

“I’m happy that I showed good pace and came away with a good result in Race 1,” he said.

“I’d hoped for a better starting position for Race 2, but yellow flags at just the wrong time in qualifying was a setback.

“Gaining race positions is always tough in such a competitive series as Eurocup – even more so when you’re trying to move forward from midfield.

“Contact with another car in the race was disappointing, but it’s always a possibility in that situation.

“Now I’m looking forward to the next round at Silverstone in a couple of weeks. I haven’t raced there before, so I’ll need to be on my game right from the start.

“Thanks to Fortec Motorsport and my sponsors Blundstone, RACT, United, Renault Australia and Richardson Devine Marine.”