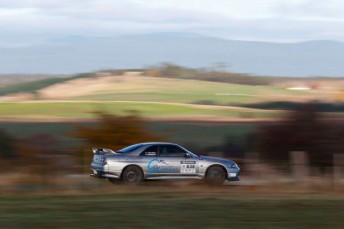 Many of them were once the performance cars motoring enthusiasts dreamed of owning, and now, with the passing of time, they’ve become more affordable and part of one of Targa Tasmania’s most popular categories – Early Modern.

They are cars built between January 1986 and December 2006 and are a combination of turbocharged, four-wheel drive Japanese pocket rockets and German supercars, with the odd Mini Cooper S thrown in for good measure.

Over 30 cars will compete for the Early Modern title over Targa Tasmania’s 2000 kilometres of stages, with a list of competitors that includes former television game show host, Glenn Ridge, and the recent Targa Hellyer Gorge Rookie Rallye winner, Stephen Maguire.

Subaru’s cult car, the Impreza WRX, and Mitsubishi’s dominant Lancer Evolution models make up a large percentage of the field, but there are also plenty of Porsches, Mazdas and Nissans to keep the Targa fans happy over the six days of the event.

Adam Kaplan is one of the event’s most popular drivers and returns again this year, but not in the crowd-pleasing Group A HSV Commodore SS that he has driven in previous events. Instead, the Sydney company director will temporarily switch to a 2004 BMW M3 CSL.

“Unfortunately to keep the Walkinshaw Commodore reliable we need to do a full rebuild on the engine every 1500 to 2000km,” Kaplan explained.

“The car is currently half-way through its rebuild cycle, so this meant that we would either have to do a full (expensive) rebuild unnecessarily, or save the car to defend its Targa High Country title later this year.

“We chose to do the latter and instead we’ll be bringing a car that’s brand new to Targa. Freshly imported from Germany, it’s one of the limited edition, lightweight BMW M3s.”

According to Kaplan the BMW M3 is not nearly as powerful as the Commodore, but it’s a lot more nimble and should be able to set faster stage times on the twisty Tasmanian roads.

“It will be faster – possibly because it won’t be driven as sideways all the time – but hopefully it will still provide some spectacle for the fans.

“I apologise to all the fans of the Commodore, but I can say with confidence that it will be back,” Kaplan added.

For other competitors, such as Geoff Bott, the move from a classic car to the Early Modern competition has been a revelation.

Bott campaigned a Jaguar XJS for many years, achieving some great results that included two class wins in Targa Tasmania, but the lure of a more modern car was an itch he had to scratch.

“The Jaguar XJS is a great car, but it was time for a change and my son John was keen on GTRs, so we went halves on the Nissan R33 when he spotted it on eBay,” Geoff Bott said.

“The performance is phenomenal with over 400bhp at the wheels, enormous grip and brakes. It’s a quantum leap in technology with 4-wheel drive and steering, whereas the XJS was 20 years behind in design.”

The step up in performance also meant some new lessons to be learned for the driver as well.

“The car is just amazing to drive for someone like me who has only ever driven two-wheel drive cars. It requires a completely different technique and I am still learning to handle it,” he adds.

The one thing that is similar between competitors in all of Targa Tasmania’s classes, however, is the desire to get to the end of the event and sample every last kilometre of the marathon event.

“Why do I keep coming back to Targa? That’s a good question, and it makes no sense whatsoever. I have to get my Targa fix regularly or I go crazy dealing with work and everyday life,” Bott says.

“While we all want to win, I’m realistic enough to know that there are too many guys in our class with bigger budgets and who are decades younger. A finishers’ award and a Targa Plate is our goal.”

Not every driver can win Targa Tasmania, but the beauty of the event is that nearly anyone in any type of car, and with any budget, can compete in Australia’s most iconic tarmac rally.

The event will take place from Monday, April 27 to Saturday, May 2 in 2015, with a field of over 200 cars set to enjoy the Tasmanian roads, considered to be the finest tarmac rally roads in the world.