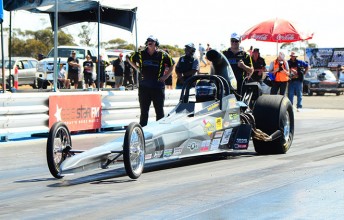 Geddes made a recent switch in classes from B/DA to E/DA in an effort to become more competitive and it looks to have paid off with instant dividends.

The man from Ballarat and his team had the new 284 cubic inch engine singing beautifully qualifying first in Super Comp before resetting both the elapsed time (4.646) and mile per hour (146.37 mph) records for E/DA over the eighth mile. He then backed it up in the final taking the win over Mario Barbon with a 4.659 on a 5.07 index.

“We planned to come here and do well,” said Geddes. “It was always a risk changing classes at the last minute three quarters of the way through the season when we’ve gone pretty well already.

“But we thought it was worth a gamble and we came here with the 284 (cubic inch engine) and we’re very pleased with the results, it far exceeded what we thought. We’re probably a tenth quicker straight away to the eighth mile than we thought. The track was fantastic; it took everything we threw at it, the car performed well.

“We were very pleased to be top qualifier, both records and the win so we’ve got plenty of points in the bank now and we’re looking forward to Adelaide and the last round in Sydney where we hope to have a six under car, which we should given the performance so far.”

Elsewhere in Super Comp, Peter Pisalidis reset the AA/APIA records with a 4.452 elapsed time and 167.03 mile per hour.

In other action Ryan Van Dyk didn’t do his Championship hopes any harm by taking home the trophy in Supercharged Outlaws with a win over current Australian Champion Luke Marsden in the final. Van Dyk also eliminated Mark Kuhn in the semi and Jake Donnelly along the way.

Jasmine Ryan went all the way to the final of Modified defeating local favourite Kingsley Kuchel, both Kenny and Tim Stewart and a red lighting Alex Van Leuven in the final.

Shane Walker eliminated Championship contender Joe Khoury and Malcolm Price on the way to a final victory over Johnny Ireland in Modified Bike to ensure a shootout throughout the final rounds. Although the weekend didn’t go quite to plan for Edgell Mallis, he did reset the B/MB mile per hour record to 125.05 mph claiming valuable bonus points in the process.

In Junior Dragster Bradley Bishop beat title chaser Toby Austin who claimed a second straight runner up placing after his effort at the Desert Nationals.

And finally Matt Forbes kept the undefeated streak alive to retire his current ’27 Ford Roadster as Danny Bucella broke out to hand Forbes the win in Super Gas.

Round 10 of the Aeroflow Sportsman Drag Racing Championship now moves onto a split round between the Benaraby Nationals October 3-4 at Benaraby Raceway and the Fuchs Spring Nationals in Adelaide October 4-5.

Also on the card were the Lamattina brothers spewing nitro in preparation for the 10th round of Top Fuel at the Fuchs Spring Nationals. Phil Lamattina’s best pass came on a 3.303 at 261.51 mph while John Lamattina posted a 3.379 at 202.31 mph.