Perfect result for Pascoe in GP53

Perfect result for Pascoe in GP53

Securing the result that he coveted more than any other, Australian Super Sedan champion Matt Pascoe delivered a devastatingly dominant performance at Ausdeck Archerfield Speedway on Saturday night (May 18) to trounce a strong field and win the 53-lap race staged in honour of his father. Despite starting the GP53 Graham Pascoe Memorial feature race from position nine, Pascoe faced little resistance in advancing to the front of the field before clearing away to score an emphatic win. Despite a couple of mid-race restarts that brought him back to the field, Pascoe was more than seven seconds ahead of second-placed Sean Black at the chequer, with Justin Randall finishing in third spot ahead of Ash Bergmeier and Darryl Moon. 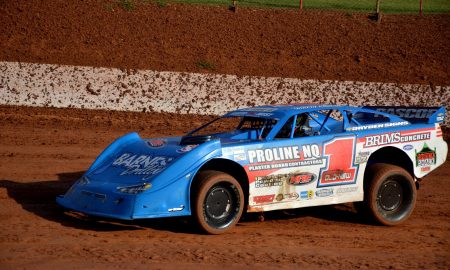 It was a fairytale result in the Dirt Modified feature race as well with Ray Klarich enjoying a fond farewell after 28 years of competition, winning his final feature race ahead of Australian champ Kevin Britten and Mitchell Randall.

The Queensland Modlite Championship ended in controversial fashion when contact between race leader Terry Leerentveld and Sean Rose resulted in the latter being awarded the win as Leerentveld limped home sixth after extricating himself from the turn four concrete. Scott Lehfeldt finished in second spot ahead of Dan Lewis, Sam Gollschewsky and Jac Carnall.

With a couple of locals failing to front, a 30-car field of Super Sedans assembled to pay tribute to Graham Pascoe, although only 29 would hit the track for time trial qualifying. It was Darren Kane who topped the timesheets, stopping the clock at 14.261 to outpace Trent Wilson (14.394), Matt Williams (14.413), Steve Latham (14.475) and Black (14.484), with Pascoe sixth quickest ahead of Wayne Randall, Moon, Bergmeier and Justin Smithwick.

After such a strong start to proceedings, Kane saw his aspirations evaporate before a racing lap had been completed when he, leading the field into turn one in the opening heat, found himself upside down and done for the night. Bergmeier inherited pole position for the restart and took full advantage to lead home Black and Mark Towers.

Pascoe prevailed in heat two over Wilson and Smithwick, with Williams winning heat three in advance of Wayne Randall and Justin Randall.

Latham looked strong in taking heat four from Darryl Moon and Michael Nicola, who then backed up in heat five to finish second behind Pascoe, with Bob McCosker third.

Young Tyson Moon remained stoic under pressure to prevail in heat six, edging out Justin Randall and Latham in the closest result of the night.

Kyall Fisher bested Black and Nicholas O’Keefe in heat seven to secure a spot in the Top Ten Shootout, while the final heat of the night saw Matt Williams join Pascoe atop the standings when he also scored a second win, this time over David O’Keefe and Ed Doherty.

With the likes of Anning, Tony Brinkman, Tania Smith, Sam Roza, Gary Higgs and Wayne Randall joining Kane on the sidelines, just six cars fronted for the B Main and it was Mark Towers who motored home ahead of Leigh Williams to take the race, with Nicholas O’Keefe and Dion Bennett also transferring to the feature race.

The opening round of the Top Ten Shootout saw Fisher and Bergmeier eliminated as Wilson and Moon moved forward to take on Justin Randall and Nicola. Clocking an even quicker lap, Wilson prevailed again to continue his advance, with Randall joining him in progressing to face Latham and Black. Latham became the first to defeat Wilson, who still advanced to the next level by outpacing Black and Randall. In outgunning Pascoe, Latham and Wilson to win the final showdown, Williams picked up $500 but would start the feature race from position 10 with Pascoe alongside.

It would be Darryl Moon who would end up on pole position alongside Fisher for the GP53 final, with Justin Randall and Wilson on row two ahead of Bergmeier, Latham, Black and Nicola. Behind Williams and Pascoe came McCosker, Doherty, Tyson Moon, Ian Brims, Smithwick, David O’Keefe and the B Main transferees. The first two attempts to get the race underway were deemed unacceptable by officials, but the third attempt produced an identical outcome with Moon easily leading the field through turn one and the opening laps. Lap five saw Randall depose Moon from the lead, with Pascoe having already surged to third. Three laps later and Pascoe was now second and biding his time behind Randall before pouncing to take the lead on lap 15. As the first to emerge from a pack of cars snookered behind Fisher, Latham moved to third on lap 16, only to spin away his chances in turn three on lap 25 to bring about the first restart. With Fisher heading infield with a flat tyre at this point, the battle for the minor placings would intensify when racing resumed, albeit only for two laps initially before a crash involving Bennett and Nicholas O’Keefe on the main would be the final interruption. Two laps into the resumption, Black advanced to third while Bergmeier would find his way past Williams and Moon to finagle fourth. Out front, Pascoe was in a class of his own on a track he described as awesome, clocking a best lap half a second quicker than anybody else as he cleared away to score an emotional win. Black rounded up Randall with five laps remaining to snare second, with Bergmeier fourth at the flag, followed by Moon, Matt Williams and Latham, whose recovery from the rear was aided by the fact that Pascoe had put more than half the field a lap in arrears. Nicola was the only other to go the full distance, with Ian Brims and Tyson Moon rounding out the top ten. Smithwick, Leigh Williams, Nicholas O’Keefe and David O’Keefe were the remaining finishers, with Bennett, Towers, Wilson, McCosker and Doherty joining Fisher on the infield.

Although down in numbers for their final fling this season, Dirt Modifieds still delivered some thrills, mostly due to the efforts of Kevin Britten. Heat wins were shared between Britten, Mitchell Randall and Klarich, who pounced to lead the feature when Britten spun in turn three on the opening lap and had to restart at the back. Klarich led the first five laps before Randall went off-script and dared to move ahead. However, two laps later, Klarich was back in control and it remained that way to the chequer, despite a late surge from Britten, who was his typically spectacular self as he passed inside and outside as the circumstances required. Despite his heroics, Britten simply couldn’t deny Klarich a victorious farewell. Randall remained third ahead of Clark and Bruggy, who were followed to the flag by Phil Roberts, Chris Polsen, Trent Scofield, Phil McNamara, Trevor Wiley and Mark Connolly, leaving Andrew Pezzutti as the only casualty.

The opening round of heats for the Queensland Modlite Championship saw Sean Rose, Scott Lehfeldt and Terry Leerentveld collect wins in a preview of how the feature race would transpire. Leerentveld and Rose would win again in round two, with Sam Gollschewsky also successful.

As was perhaps to be expected, less than half the field made it to the finish in the B Main, leaving Warren Hooper to secure the win ahead of Alex Coward, Kurt Grambower and Rachael Jenkins.

Rose outsprinted Leerentveld into turn one to lead the field away in the 25-lap championship feature race and expanded the margin until a restart intervened on lap eight when Troy Carnall tipped over in turn four. Rose again established a gap, only to have it negated again when Warren Hooper spun in turn four. Further interruptions on laps 17 and 19 courtesy of spins from Chris Were ensured that Leerentveld remained in a position to challenge and, as the laps wound down, Rose found himself under serious threat for the first time. Two initial attempts at an outside pass exiting turn two saw Leerentveld squeezed for room and forced to back out, before finally making the pass stick with just one lap remaining. However, into the final corner, Rose careered up track and sent Leerentveld into the wall. As Rose raced under the chequer, Scott Lehfeldt and Dan Lewis scrambled past the ailing Leerentveld to secure the minor placings. Whilst Sam Gollschewsky was deserving of a good result for his willingness to run high on the track in his bid to move forward, he probably would have liked his 4th-place finish to have been achieved under different circumstances. Jac Carnall also moved ahead of Leerentveld in those final few meters, with Leroy Martin, Sean Egan, Grambower and Zac McDonald rounding out the top ten.

Following heat wins to Jayden Iacono, Jim Kennedy and Queensland champ Jason Rae, it was Kennedy who led every lap of the 20-lap Patrick Moroney Memorial Lightning Sprint feature race. Having started seventh, Keith Blatch steadily worked his way forward and pounced following a restart with only two laps remaining when Rae found himself shunted aside by Tyler Stralow in turn one. Iacono would finish fourth ahead of Scott Jukes, Rob Holmes and David Van Vegchel.

Michael Taylor completed a clean sweep of the RSA Outlaw Sedan events, winning both heats and the feature ahead of Daniel Taylor. The best of the Limited Sedans was the Sigma-mounted Wade Baker in third spot overall ahead of Adrian Gorridge-Browne and Aaron Buchanan

It was a similar scenario in the Open Sedans, with Wayne Kirkman winning each of the races, downing Ron Hornbuckle, Matt McGee, Bob Ware and Greg Town in the feature race.

In keeping with the theme, Robert Kynaston also won each of the heats before going on to take the Ford vs Holden vs Sigma feature race. Troy Price, Michael Laver and Bernie Wright were next best.

Next Saturday night is Crazy Night at Ausdeck Archerfield Speedway featuring the chaos and mayhem of the Caravan, Boat and Dunny Derby, plus East Coast Logistics Sprintcars