The 2015 Penrite Broadford Bike Bonanza, which is a complete celebrations of all motorcycle sport, will include a special commemoration of 50 years of of bikes at Bathurst (1938 – 1988). 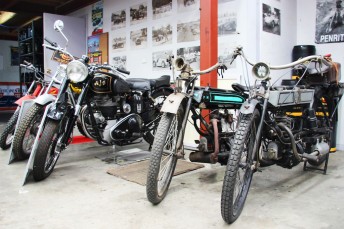 “We are proud to be associated with Broadford and the Bike Bonanza,” Dymond said.

“The Broadford Motorcycle Complex is one of Australia’s longest standing facilities and is an iconic venue that homes circuits for all disciplines.

“There is no other venue like it and we need to work together to preserve it as well as the heritage of motorcycling”.

“The gala dinner has been extremely well received in previous years with many memorable stories told,” Drakeford said.

“This year promises to provide greater stories, bench racing and friendly banter as Easter of 79 will be relived on stage by the three men who made the 79 Bathurst event so spectacular.

“For the entire 20 laps, Graeme Crosby (KR750 Kawasaki), John Woodley (RG500 Suzuki) and Ron Boulden (TZ750 Yamaha) battled furiously and they will reunite on and off the track to tell their tales,” Drakeford continued.

Bell, who said he thoroughly enjoyed last year’s event was looking forward to catching up with some old friends across the weekend.

“I really enjoyed myself last year,” Bell said. “ It is a terrific gathering of past champions and any weekend spent riding is a good weekend.”

The Penrite Broadford Bike Bonanza on April 4-5 is an event not to be missed with incredible motorcycles from the early 30s to the late 80s not only on display and but also raced as past champions engage the respective crowds around all circuits.

Entries are open, and tickets for the gala dinner are still available. For more information go to www.ma.org.au or contact Peter Drakeford on 03 9685 0515 or [email protected]