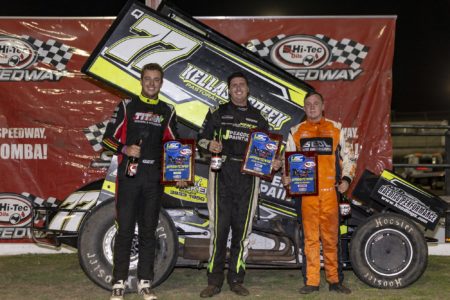 With the dust barely settled on the 2020-21 Speedcar season, the Neilson Motorsport team have already been busy with their 2021-22 season preparations with the announcement of Jayden Peacock as their new driver.

Regarded as one of Queensland speedway’s emerging talents through 410 Sprintcars, Wingless Sprints and Junior Sedans over the past decade, Peacock is looking forward to the challenge of his maiden Speedcar campaign.

In recent seasons, the 25-year-old has been plying his trade in 410 Sprintcars, but despite success, he has been held back due to budget constraints when it comes to consistently mixing it with the country’s best racers.

Following the departure of regular driver Rusty Whittaker after four successful seasons, the opportunity to drive one of the country’s leading Speedcar teams from owner Dwayne Neilson was presented to Peacock, which was an offer he accepted.

“Speedcars are one of the most competitive and exciting speedway classes, and I’m really looking forward to the challenge ahead and the bonus is the opportunity to do it with a successful team like Neilson Motorsport,” commented Peacock, who added that he will be running his family-owned 410 Sprintcar team next season around his Speedcar commitments.

“The plan for the first season with the Neilson Motorsport team is to compete in all of the major events on the east coast of the country, including the Australian Championship (Archerfield Speedway on January 28 and 29 – 2022), and try and learn as much as possible.

“There is no denying that Neilson Motorsport is one of the country’s best Speedcar teams, so I’m not joining them to see us go backwards, and I feel that this is a great chance to become a front-running contender.”

Joining Peacock in his move into Speedcars with the Neilson Motorsport team is crew chief Matt Black. An experienced spanner man, including a decade spent in V8 Supercars, Black has worked with Peacock in recent seasons, which has seen them enjoy success together in 410 Sprintcars, and before that with many of Queensland’s best racers. An ex-pat New Zealander has a long association with team-owner Neilson, as the pair have known each other since they were teenagers back in New Zealand through working with various speedway teams.

Neilson Motorsport team owner Dwayne Neilson is equally looking forward to Peacock getting behind the wheel of his Qld # 89 Esslinger powered BOSS car.

“I’ve watched Jayden’s racing in his family owned Sprintcar and he is certainly a hard charger, and I think the chance to grab him now with this season’s Australian Championship so close to home is a chance not to miss. He has proven his talent as a racer in whatever class he has competed in, so I’m really excited to see what he can do in a Speedcar,” he enthused.

“Matt (Black) and I have known each other since our TQ days back in New Zealand when we were teenagers, so when the stars aligned and he’s now on board as crew chief for the Qld 89 car, it’s like getting the band back together.

“The team and I are looking forward to working with Jayden and Matt, and our goal is to remain as one of country’s leading teams and I’m confident that we can achieve this together.

The Neilson Motorsport team are supported in the 2021-22 season by: