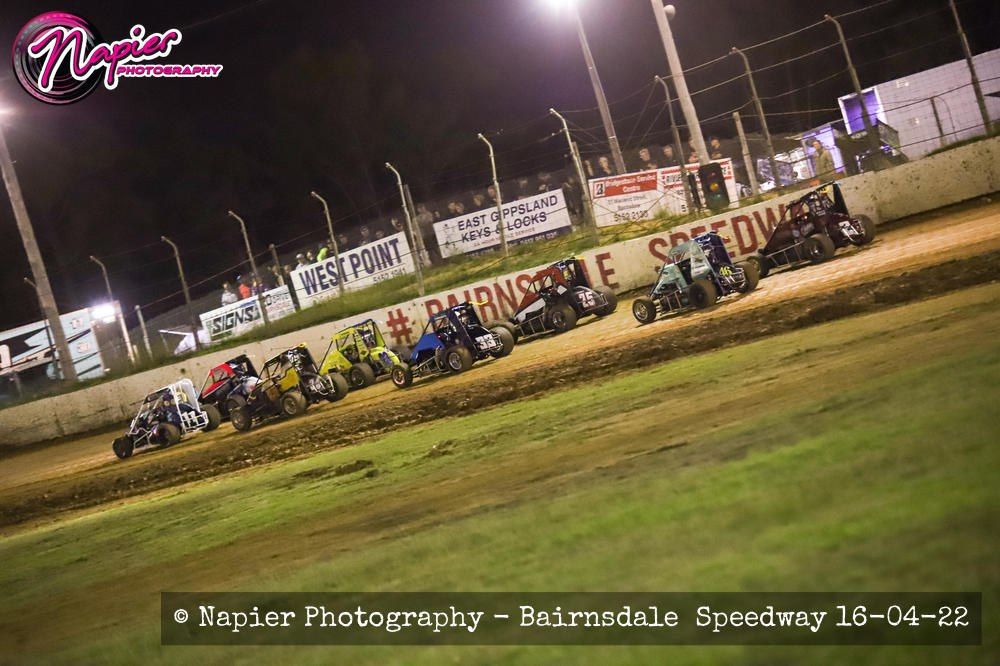 The Victorian Compact Speedcar Club is pleased and proud to have run yet another successful memorial weekend of racing across Easter with the annual Curren Memorial held at Rosedale Speedway in its 30th anniversary followed by the Keith Astrella Memorial at Bairnsdale Speedway.

Australian Champion Justin Paull continued on his winning ways winning his fifth Curren Memorial in succession and then his third Astrella Memorial also in succession across Good Friday and Easter Saturday.

Sharpe (#N34 Stealth – R1 Yamaha – SMEG) was unable to compete past night one however made a tremendous contribution of support to the Victorian officials and the Williams in particular his fellow New South Welshman. Williams made improvements across the weekend before a huge crash on Saturday at Bairnsdale, and Serle – Thrussell was able to achieve a goal of a top five finish in the Astrella Memorial.

Racing at Rosedale began with six heat races scheduled and the feature event. Starting from the front of the field Matt Papa (#V25 Spike – R1 Yamaha – Self Funded) took off into the lead in the first race of the weekend. Sharpe slotted in second spot with Joe Lostitch moved to third spot on lap one. Michael Conway moved to third spot on the second lap however Conway’s weekend came unstuck when he broke a steering box which try as hard as he did all night, he was unable to get his car back to competition. Papa went to the finish line to win by .954 of a second ahead of Sharpe, Lostitch (#22 Gardner – Suzuki GSXR 1000 – Kerby Kerb), Serle-Thrussell and Mark Hutchinson.

In the second heat Glen Wiles (#9 TCR – R1 Yamaha – The Local Garage) and Tania Hallett at the front of the field found themselves rounded up by Justin Paull on lap one and Day were the top two, Chris Curren moved to third in front of Wiles with Hallett (#15 Beast – Honda 1000 – Flash Heating & Colling) back to fifth. The very next lap Hallett moved forward to fourth as Curren dropped down the line-up to sixth after a little mistake.

By lap five Paull was ahead of Louis Rodriguez, Wiles, Day (#69 Eagle -Kawasaki ZX10 – Gazberg Earthworks), and Hallett. After ten laps heat two went to Paull in front of Rodriguez the quicker of the two by half a second during the race, then Wiles, Day, and James.

Times reversed a little in the third heat and despite winning the race, Rodriguez (#11 Stainer – R1 Yamaha – 1 Stop Construction) was being chased by the faster Paull. Curren had a great start to the third qualifier and moved to third early and by half way Rodriguez, Paull, Curren, Wiles and Aaron Stubbs were the top five. At ten laps Rodriguez took the win from Paull, Curren, Wiles and Stubbs with AJ Wiles (#32 Pearce – Suzuki GTI – Yarra Valley Towing) and Hutchinson the other finishers and Lostitch and Sharpe finishing infield.

For Sharpe during the race a collision with Lostitch after the latter spun knocked the injection stacks out of the rubber mounts. Sharpe tried to restart the car however the engine bay flooded with methanol which ignited causing a small fire that melted some engine components.

The last qualifier brought about another win to Paull. He led lap one from Curren and Wiles and at lap five the top three were still in front of Mills and AJ Wiles. The class has an evenly matched front running group and a close to each other on lap times second group and that’s how the race panned out. Paull ahead of Curren, Glen Wiles, Mills, AJ Wiles, Hutchinson (#6 Robotham – R1 Yamaha – Associated Powder Coating) and Lostitch.

Very keen to win every race he is in Louis Rodriguez was quietly confident of finally picking up a Curren Memorial. Rodriguez started on the front row with Paull with James, Papa, Curren and Glen Wiles the top six starters. The green flag set the field on its way and Paull won the start with Rodriguez right on his tail. Five laps into the race Paull led Rodriguez, Curren, James and Papa.

Whilst the top five held their positions at lap ten, behind them Mills, Hutchinson, Stubbs, Williams, Hallett, Lostitch and Cooper were all in their own battles against each other and in development or race car development. Paull remained out the front of the show on lap fifteen and Curren was challenging Rodriguez.

James’s race was cut short on lap sixteen as he headed infield and Mills moved into fifth spot and as the chequered flag came out on lap twenty, Paull crossed the finish line as the winner from Rodriguez, Curren, Papa and Hallett who passed Mills on lap seventeen. Mills was sixth, then Hutchinson, Stubbs, Lostitch, Williams and Cooper with James who after hitting oil on the track which upset his motion and he got collected by a competitor from behind and was not sure if his car was damaged or not and elected to go infield, Glen Wiles, Serle-Thrussell and AJ Wiles who blew a an engine and sat infield with a hole in the engine block, all non-finishers.

The Cooldrive Hard Charger award provided by the Current Family went to Tania Hallett who during the feature went to the rear of the field before making her way forward and she also picked up a scrutineer selected best presented award from CRC and Kitten Car Care also provided by Curren Family.

Night two of racing seen the club move up the road to Bairnsdale Speedway for the Keith Astrella Memorial where the competitors all competed in three of the four qualifiers with a twenty-lap final.

Louis Rodriguez took victory in heat one of the night and set a new ten lap track record for the class. The record lasted one race after it was beaten in heat two however Rodriguez proved for his competition winning by more than ten seconds leading Hallett who finished second all the way with Curren (#23 Brekka – ZX10R Ninja – SRV Road Freight), Papa, Serle-Thrussell, Williams, Stubbs, and Cooper the finishing order.

Justin Paull the Australian champion, set a new record ten lap mark for the class at Bairnsdale of 2 minutes 50.286 seconds in the second qualifier. Paull led from the start of the race with Serle-Thrussell in second, Hutchinson third, Glen Wiles in fourth and Mills (#10 Gordon – Suzuki GSXR 1000 – Economy Bolt) from the back who had reached fifth. Mills moved to third with a couple laps to go and Paull was able to lead to the finish Serle-Thrussell, Mills, Hutchinson, Glen Wiles, James, Stubbs, and Williams.

In heat three perhaps there was some confusion outside of the hands of the Victorian Compact Speedcar club, however the heat was flagged completed at the end of eight laps with Daniel James winning and setting a new eight lap record for the class of 2 minutes 19.482 seconds. James was leading at the lap five mark from Rodriguez, Paull, Mills and Hutchinson and won the race three laps later by .945 in front of Rodriguez who despite finishing had realised the water pump which is internal in his engine was damaged and needed replacing, a job the team could not do at the track. Third was Mills, Paull (#1 Spike – Suzuki GSXR 1000 – Ripper Stickers), Glen Wiles, Hutchinson, Serle-Thrussell, Curren, Papa and Hallett.

Making it four different winners from the four qualifiers Caleb Mills took victory in heat four and along the way set a new one lap record of 15.688 eclipsing the old mark by .3 of a second. Mills led from the drop of the green flag in the final qualifier and at lap five led James, Paull, Stubbs, and Williams. Williams passed Stubbs on the final lap and the final positions were Mills, James, Paull, Williams, Stubbs, Hutchinson, Hallett, and Cooper.

The twenty-lap feature event got under way with Mills and Paull on the front row. James started third Chris Serle-Thrussell in fourth, Tania Hallett in fifth and Mark Hutchinson in sixth.

The green set the field on their way and Paull led lap one from Mills and James. The top three remained the same at lap five with Hallett in fourth and Serle-Thrussell in fifth. Glen Wiles was moving fast and was in sixth by lap ten before heartbreak for Mills with his car breaking down on lap fourteen with a failed clutch. Paull led James, Hallett, Serle-Thrussell and Wiles at lap fifteen and that is how the race panned out with Paull the winner of the Keith Astrella Memorial for the third season in succession. Finishing in sixth spot was Hutchinson followed by Stubbs, Cooper, and Papa with Williams a victim of a huge rollover in turn one and Curren also unable to finish.

The Tournier Family also supported an encouragement award over the weekend with the lowest points driver across the weekend picking up an extra $100 on behalf of the family. This went to Gavin Cooper one of the club’s developing members from the Bendigo area. Such a key area to the club to keep interested competitors involved, especially with Rushworth and Swan Hill supporting venues of the class.

The Victorian Compact Speedcar Club would like to thank the weekends supporters that include;
The Curren Family
The Astrella Family
Kay Mainline Augers
Kangaroo Lake Caravan Park
Cooldrive
Napier Photography