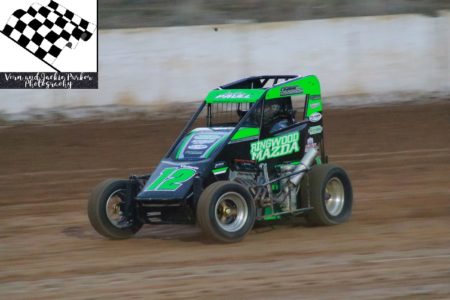 The Victorian Compact Speedcar Club 2020/21 season ‘Ringwood Mazda’ Victorian title has been run and indeed won by club member Justin Paull at the sensational Wangaratta City Raceway venue with the defending champion Mark Heaton from New South Wales putting up a good fight from start to finish trying to hold on to the perpetual trophy.

In great weather, the Wangaratta Speedway track was perfect for racing and a field of fifteen found their way to the venue to compete. New South Wales racers and Victorians competed in three qualifiers each across the six that were run.

In the first of those ten lap qualifiers, Ash Booker (#66 Signs & Lines – Stealth, R1 Yamaha) a class national racer across three categories of the sport was set for pole position in the AC Hall Air Conditioning supported race, he set the pace each and every lap and defeated Justin Paull, Daniel James, Tania Hallett, Shaun Robinson, Mark Cecil, and New South Welshman Brad Forgeard, whilst Aaron Stubbs (#46 – Cohuna Car Spa – BHR, 97 YZF Yamaha) was unable to complete the distance. The margin in what proved to be the fastest heat of the evening at the end of the green to chequered race was just .707 of a second.

After winning at Wangaratta early in the season, Conway (#77 – Baretta Fabrications – Henchcraft, Kawasaki ZX10) was keen to be on top of title night. He started with a victory in the D & F Race Products supported second heat from Heaton who pressed forward from sixth, Kyle Sharpe from New South Wales, Andrew Wiles, Mark Hutchinson, David Hutchinson, and Wangaratta Local Scott Thomson (#17 – Thomo’s Cash for Scrap – Razor, R1 Yamaha). Conway set some face laps on his way to a five second win.

In the third race supported by Baretta Fabrications Justin Paull from row two passed Cecil (# 7 – Self Funded – Cox, GSXR Suzuki) on lap one and took four laps to pass James, on his way to a win in the third heat qualifier. Stubbs was a non-starter with issues with his car and Paull with the fastest one lap time of the evening of 15.988 was the victor over James, Cecil, Booker, Robinson, Hallett and Forgeard (# 55 – Listec Race Cars – Henchcraft, GSXR Suzuki) with a three second margin at the finish in a race time barely slower than Booker in the first.

Heaton (# 1 – Jam Signs – Stealth, Kawasaki ZX10) converted his front row start in the Powerplay Automotive fourth heat into a win as champions should do. Sharpe chased in second before Conway picked him off on lap four and almost caught the champion and race leader Heaton. With just .757 between first and second Heaton won from Conway, Sharpe, Wiles, David Hutchinson, Mark Hutchinson (# 6 – Associated Wire Fabrications – Robo, R1 Yamaha), and Scott Thomson was unable to finish.

In the final Mobee Wash supported qualifier Paull who had recently won the two Easter weekend feature events took control of the race from the start and squeezed out a five second margin as the race drew to a finish. Booker, Sharpe, Robinson (# 73 Diamonds Tints – Stealth, GSXR Suzuki), Wiles, David Hutchinson (# 35 – 1 Stop Property Services – Stealth, R1 Yamaha) all finished behind him.

A twenty-five lap ‘Ringwood Mazda’ Victorian title was up next with eleven stars making the start grid. Paull, Heaton, Conway, James, Cecil, Sharpe (# 34 – Capital Precision Constructions – Stealth, R1 Yamaha), Robinson, Wiles, Hallett, Mark Hutchinson, and David Hutchinson. Unbelievably the title race went from start to finish also without a stoppage. Every heat bar one finished ten laps without a stoppage and then the feature event did exactly the same, a credit to each and every race driver at the event.

Paull hit the lead at the start of the title race, Heaton was right with him early. Keeping up with the pace with Paull was tough for those behind and he started to eek out a margin. Heaton, James, and Conway kept close proximity to each other, as did Cecil and Robinson a few seconds further back.

Proving his talent, Paull (# 12 – Ripper Stickers – Stealth, R1 Yamaha) maintained his status as the fastest driver in the field with a quickest feature race time .200 of a second better than the next best in the field. On lap twenty four of the twenty-five and with hands on that third placed trophy, Conway, was rounded up by James who wanted that trophy just as much. The chequered flag dropped and Paull beat, Heaton, James, Conway, Cecil, Robinson, Sharpe, Hallett, Wiles, Mark Hutchinson, and David Hutchinson, with an amazing nine second margin.