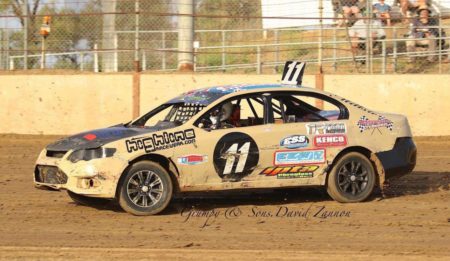 For the second occasion in four seasons, the Patriot Motorsport team romped to victory in last Saturday night’s Bruce Riddiford Memorial at Geelong’s Avalon Raceway with Jacob Mills, on this occasion, as their driver.

After last winning the Bruce Riddiford Memorial event back in 2017 with Mark Jennings as their driver, current Patriot Motorsport team pilot Mills was in fine form throughout the night and romped to the feature-race spoils.

Mills, driving the NSW # 11 Patriot Motorsport FG Ford Falcon, dominated both of his heat races and then managed to continue that form, despite a disappointing sixth-place result in the pole shootout dash that saw him start from position six, throughout the 30-lap feature race and he was able to claim the lead 10 laps from the finish. Once out in front, Mills went on to score an impressive victory over David Barrie in second and Dale Morrison in third.

“I couldn’t have asked for a better night and the Patriot Motorsport FG Ford Falcon was an absolute pleasure to drive,” expressed Mills.

“Apart from the support of Patriot Motorsport team owner Reg and Kat Corbett and all of the team’s sponsors, a massive thanks must go out Keith Hussey from Speedline Race Engines, as this season’s engine is next level and it’s evident in many of our performances so far this season.”

Mills and the Patriot Motorsport team are currently in strong form and with a lot of major events still left on the 2020-21 season calendar, such as the South Australian Title at Mount Gambier’s Borderline Speedway on March 20 and the Victorian Title at Alexandra Speedway on April 2 and 3, they are focused on continuing the form that hopefully gets them into the victory lane.

“Running up the front on a consistent basis breeds a lot of confidence within not only yourself but the whole team,” the 2011 National Production Sedan Champion said.

“With the Patriot Motorsport team currently on a bit of a roll at the moment, the plan is to build on these performances and hopefully bring home some good results at the upcoming blue-ribbon events.”

The next outing for Mills and the Patriot Motorsport team is going to be this Saturday night’s Milvegas $1000 to win event at Mildura’s Timmis Speedway.

The Patriot Motorsport team would like to thank their 2020-21 season sponsors: