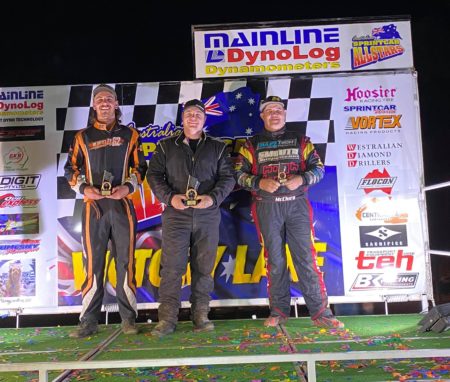 For the second weekend on the trot, Jacob Mills picked up the winning spoils for the Patriot Motorsport team, and on this occasion, it was during last Saturday night’s $1000 to win Milvegas Street Stock event at Mildura’s Timmis Speedway in Victoria.

Despite the night ending in victory lane, it certainly wasn’t an easy night in the driver’s seat for the 27-year-old, who demonstrated plenty of pace throughout his three qualifying heat races. In his opening heat race, Mills was battling for the lead up until he suffered a flat tyre on lap five and it forced him to retire. The following heat race, he started from the back of the field and went on to charge his way through the field to finish in second. For the third and final heat race, Mills was fighting at the front of the field on the opening lap but managed to make quite heavy contact with the wall. As a result of this contact, he dropped back to fourth and then moved his way forward, despite his car suffering from a damaged left rear lower control arm, to pick up the win.

After an up-and-down run throughout the qualifying heat races, Mills, who was forced to run with the damaged control arm from the final heat race, still managed to qualify for the 20-lap feature race out of position five. From the drop of the green flag, he was on the move and within a couple of laps had moved up to third. Only a handful of laps later, he moved past Morris ‘Oggie’ Ahearn for second and then proceeded to battle with youngster AJ Lawrence for the lead. In what was a battle of youth and experience, Mills was able to take the lead away from Lawrence on lap eight following a gusty slide job passing move. Once out in front, Mills managed to use the high line of the track to great effect and went on to score a commanding victory.

As one would expect, Mills was rapt to score another win for both himself and the Patriot Motorsport team.

“It was great to get another win under my belt, and this is just another example of where myself and the Patriot Motorsport team are headed,” he said.

“The Timmis Speedway track on Saturday night was a challenging one, as you had to drive to the conditions, and that’s exactly what I did throughout the feature race.”

Mills continued on by saying that he is really happy with where he and the Patriot Motorsport team are at.

“My confidence levels are pretty high at the moment, and my goal at the beginning of this season was to get consistent track time, and that’s what I’m managing to do and at the moment it’s all paying off,” commented the 2011 National Production Sedan Champion.

“Once again, I’d like to thank Reg and Kat Corbett from the Patriot Motorsport team for all of their support, but I’d also like to especially thank my partner Bec, along with my cousin Joel and his partner Zoey, for all of their help, and another thing is that I’m very thankful for is all of the support from people coming up to me at the track and saying how pleased they are to see me driving so well.”

Mills and the Patriot Motorsport team are set to next be in action on the Saturday night of March 13 at Warrnambool’s Premier Speedway in the south-west of Victoria.

The Patriot Motorsport team would like to thank their 2020-21 season sponsors: