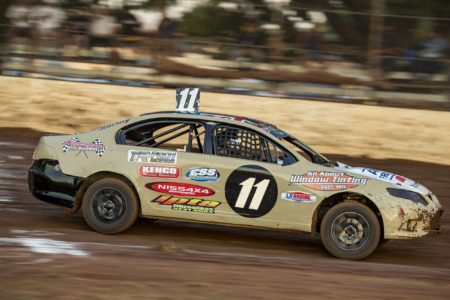 After six seasons and a total of 16 guest drivers along the way, the Patriot Motorsport team recently made the shock announcement that their time in the Street Stocks class has come to an end.

“I’m very proud of what we achieved during our six seasons in Street Stocks, but there is no doubt that the best thing to happen to us was all of the people that we have met and become life-long friends with along the way.”

When it comes to results for the Patriot Motorsport team during their six seasons in Street Stocks, they include of many major event wins, which includes a breakthrough NSW Title victory with South Australian Rhys Heinrich and various memorial event wins with other drivers, along with the 2017 Queen of the Mountain at Redline Raceway in Victoria with Kiona Sunerton. Apart from the various wins, there have been minor podium finishes with Mark Jennings (2017 National Title), Glenn Mitchell (2017 NSW Title), Brad McClure (2019 Northern Territory Title) and Jacob Mills (2018 NSW Title and 2021 South Australian Title).

On the other side of the coin, the biggest lowlight of their time in Street Stocks was when the Patriot Motorsport team drove to the win in this season’s Queensland Title at Kingaroy Speedway when Josh Harm was their driver, only to be disqualified post-race due to a technical tyre breach.

Apart from the Western Australia and Tasmania states, the Patriot Motorsport team travelled throughout Victoria and South Australia chasing the major events, along with various trips to NSW, Queensland and even up to the Northern Territory.

It’s interesting to note that the Patriot Motorsport team took their Ford Falcon Street Stock on various occasions to contest Production Sedan events, and they were able to hold their own with various top-10 finishes in state titles.

The focus for the Patriot Motorsport team now is their move into the Modified Sedan class for the 2021-22 season with a yet to be named driver of the soon-to-be built FG Ford Falcon.

The Patriot Motorsport team would like to thank their current sponsors: