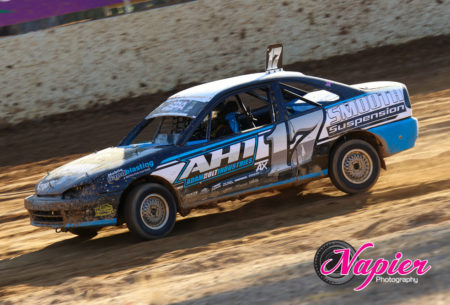 Linken Paterson from Healesville and Darcy Micallef both won two heats each in the Top Stars with Jaxson Vella and Luke Cornfoot the other two before a fifteen lap final. Micallef led lap one before Paterson took over the lead and led every lap from there and blew to a five second margin as he cross the finish line a quarter of a lap in front of his nearest challenger. Darcy Micallef secured second in front of his own brother Ben with Jaxson Vella in fourth and another Alexandra member Rhys Meakins from Kilmore in fifth.

A different story for the result in the New Stars with a much closer finish. Dylan Barrow from Wandin North led all twelve laps to the finish to defeat River Paterson. Bailey Rumler, Jordan Pegg and Seth Sloane rounded out the top five with Barrow earlier winning all three heats he competed in, Rumler, Sloane and Paterson one apiece.

Barrow had an even better feature race win in the Victorian Speedway Council state series for Junior Sedans where Barrow would defeat Dillon Taylor by a five-second margin with Linken Paterson third ahead of Kasey Ingram and Rhys Meakins. Many local drivers doubling up from one class to the other with two cars of different specifications to compete in. Barrow won three heats, Taylor two and Paterson one.

The popular Sports Sedan class had a great feature race with Ricky Cornwall and Matt Nelson swapping the lead between them a couple of times before the twelve-lap final was won by Nelson in front of Josh Service, Luke Fallon, Lee Beach and Shane Kruger. Kruger won two heats before lining up for the final whilst Service, Beach, Nelson and Cornwall won the others.

The Standard Saloon feature race was won by Courtney Meakins after she passed Trevor Kuhne on lap five of the eight lap final. Meakins led by a large margin before slowing down towards the end as she reached the finish line. Tracey Ingram finished in third place with Mick Coomer and Sarah Price rounding out the top five.