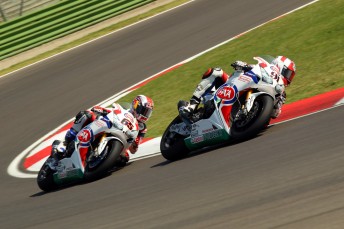 The Pata Honda team heads to Imola in northern Italy this weekend (9-11 May) for round four of the 2014 World Superbike championship, seeking further success with its Honda CBR1000RR Fireblade SP machines.

Jonathan Rea is in a rich vein of form, having scored three podiums in the last four races, including a win in the last outing at a wet Assen in the Netherlands. The 27-year-old’s record at Imola’s historic 4.936km circuit is impressive, too, with a win in 2011 and another podium last season.

His Pata Honda team-mate, Leon Haslam, also has also been on the Imola podium on two occasions, both two seasons ago when the 30-year-old was still recovering from injury. Haslam scored a fifth place last time out at Assen and is targeting another step forward in Italy this weekend.

The famous Autodromo Enzo e Dino Ferrari circuit is located in the heart of the town of Imola, 40km south-west of Bologna in northern Italy. World Superbike action begins there with Free Practice 1 at 11.45 local time on Friday morning, with Sunday’s two 19-lap races going at 10.10 and 13.10.

Jonathan Rea: “I really enjoy riding at Imola but the whole weekend is a great experience because there’s always such an atmosphere at the track with all the passionate Italian fans. I’ve actually been in Italy with my family since the last race at Assen, so I’m looking forward to the weekend here. I want to build on the recent results we’ve been able to achieve and keep the ball rolling. The layout at Imola really suits me and the bike, but we’ll be concentrating on set-up through all the practice sessions to make sure that we can run the CBR with the front group on raceday. At the moment, the weather looks OK, but we certainly hope it’s more consistent than at Assen.”

Leon Haslam: “We’ve had some time in Italy since Assen – it’s good to back here to acclimatise because it’s been a while since we stayed here for any length of time. Assen could have been a lot better, really, but we had some set-up problems. In the wet second race I got held up a bit, but it was good to be on the pace because all previous wet weather riding I’ve done on this bike has not ended very well! I’m really looking forward to riding at Imola, even though I’ve had mixed fortunes there in the past. I effectively lost the championship there in 2010 but I’ve been on the podium a couple of times, too, and last year was my first competitive race back after breaking my leg. The circuit been good for the Fireblade in previous years, though, so I’m confident that we can set the bik e up for the circuit and target some better results this weekend.”