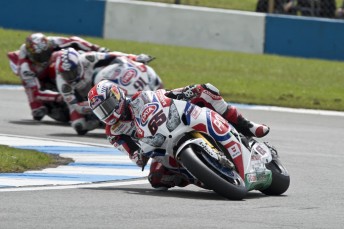 The Pata Honda team is preparing for this weekend’s (6-8 June) two sixth-round World Superbike championship races at the Sepang International Circuit near Kuala Lumpur in Malaysia.

The weekend marks the first visit of the World Superbike championship to Sepang, situated just 60km to the south of the centre of the Malaysian capital, as the production-based series spreads to an increasingly wider global audience.

It will be the first time that the Pata Honda CBR1000RR Fireblade SP has been raced at the fast and flowing 5.548km Sepang circuit, which is characterised by two back-to-back straights at the end of the lap. However, the team’s two British riders Jonathan Rea and Leon Haslam have both visited in the past.

Northern Irishman Rea, 27, tested Honda’s RC212V MotoGP machine at Sepang at the end of 2011, while 31-year-old Haslam from Derbyshire last raced there during a season on a 250cc Honda in Grands Prix in 2002.

Jonathan Rea: I’m really excited about going to Malaysia because it’s a new race on the SBK calendar. I really like the circuit layout and I visited a few years ago when I did some testing for HRC’s MotoGP team in the last season of the 800s. Donington was a tough round for us and we turned our attention to this next round immediately after the races there.

“I hope we can achieve better results than at Donington and I’m really looking forward to the challenge of taking the CBR on a new circuit. The humidity will be quite intense in Sepang and we’re expecting high temperatures but I’m in good physical conditions to tackle the two races. The most important thing is that we are able to extract the full potential of the bike which we didn’t do at the last round.”

Leon Haslam: “I’ve been to Sepang before – it was about 12 years ago, but I remember which way it goes so I don’t see it being too much of a problem. A few of the other riders have ridden there, too, including Johnny, so I’m not sure anyone will have too much of an advantage in that respect. It’s quite a fast and flowing track and the CBR should be quite strong in those areas.

“The heat will be an issue, of course, and the conditions can make a big difference in lap times from the morning to the afternoon. We’ll hope for some consistent weather that will help us with setting up the bike for Sunday’s races.”