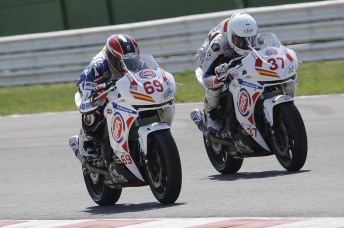 The final round of the 2014 Pata European Junior Cup, powered by Honda, takes place on Sunday at Magny-Cours in France.

After seven rounds of frantic and nail-biting action on identical Honda CBR500R machines – often with the winning margin measured in thousandths of seconds – it all comes down to the eighth and final race of the season at the 4.411km circuit in central France, 260km south of Paris.

For series leader Augusto Fernandez the task for the weekend is clear: he needs just a single point from Sunday’s 10-lap finale to secure the 2014 European Junior Cup title and, with it, a ride in the 2015 European Superstock 600 championship.

However, the final point is often the most difficult to acquire and, despite winning four of the seven races so far this season, the Spaniard who turned 17 last week was able to finish no higher than sixth last time out at Jerez in Spain.

Second-placed, Javier Orellana, also from Spain, knows that only what would be his second victory of the season will do on Sunday, plus the hope that Fernandez finishes outside the points.

If the drama that is so often thrown up by this closely-matched series is anything to go by, Sunday’s EJC showdown is not to be missed.

“Strangely enough, the two title contenders were not on the podium last time out in Spain. Instead it was three new guys, with Josh Harland taking his first win of the season,” Gerry Bryce – series director, Pata European Junior Cup, said.

“He has also won here at Magny-Cours in the EJC so I think there’s going to be a lot of pressure on Augusto (Fernandez).

“He only needs one point but he has to finish the race for that and, even though he’s a top 15 runner any day, I just hope he can bring it home without any mistakes.

“Javi (Orellana) doesn’t really have the pressure, but he’ll be wanting to finish the season on a high as he’s looking to move up to Superstock 600s next year.

“Hopefully he can put his talent on display on Sunday because he’s a great rider. There are about five or six other guys who could make the podium this weekend and we’re looking forward to a great finish to this final season with Honda’s amazing CBR500R before we move up to the bigger and more powerful CBR650F for next season.”