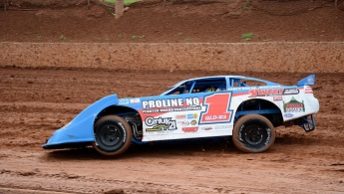 Making their first appearance at Ausdeck Patios Archerfield Speedway this season on Saturday night (December 2), Super Sedans produced some terrific racing tempered by a few wild moments before Matt Pascoe emerged victorious in round three of the Brims Concrete Championship Series. The current Queensland and Western Australian champion finished ahead of Justin Randall and Sean Black in the gruelling 40-lap feature race to secure his second win in as many rounds, with Matt Williams finishing fourth ahead of fellow Rockhampton-based racers in Gavin Northfield and Brendan Doyle.

The Super Sedan action got underway with Northfield taking out the opening heat over Pascoe and Tania Smith, while Ryan Cats endured an early end to his night when he collected an errant Dale Christensen on lap three.

Williams downed Wayne Randall and Ian Brims to win heat two before Darren Kane streeted the field in heat three to win by more than 10 seconds over Justin Randall and Black.

Heat four saw Black lead home Tasmania’s Adam Beechey, who was fast but out of luck as the night progressed, with Smith third again. Steve Jordan set the early pace in heat five before heading infield, leaving Pascoe to win by a significant margin over David O’Keefe and Nicholas O’Keefe. Heat six produced the closest finish of the night when Kane surged out of the final turn to edge Brims by 0.053, leaving Wayne Randall in third.

Beechey suffered a significant setback in heat seven when he made hard contact with the main straight wall, observing from the infield as Pascoe powered home ahead of Kane and Sam Roza. Northfield doubled up to win again in heat eight, this time ahead of Justin Randall and Jack Childs in a race that saw Brims end his night when, unable to avoid an immobile David O’Keefe in turn three, he ricocheted hard into the wall.

Smith looked on her way to victory in the final heat until a flat tyre cruelled her chances, leaving Bob McCosker to take the race in advance of Black and Williams.

The pre-race grid draw for the feature event saw Northfield emerge with pole position alongside Justin Randall, with Kane and Roza sharing row two ahead of Black and Randall Snr while Pascoe, who finished equal top qualifier with Kane, found himself shuffled back to the outside of row four alongside Williams. Northfield shot to the front at the drop of the green, but chaos ensued in turn one when a stuttering Smith sent everyone scattering before being collected by Christensen, putting both cars on the grass. Just one lap was completed at the next attempt before Doyle and Nicholas O’Keefe somehow managed to spin in the main straight, leaving Northfield to lead away again momentarily before Kane pounced to assume the lead. With everybody else settling for single file on the bottom of the track, the likes of Pascoe, Black and Wayne Randall utilised the high side to good effect. The field bunched again on lap 17 when Ed Doherty exited after an altercation with the back straight wall, with Roza also departing at this stage. Kane continued to lead as the chasers closed in, enduring another restart when Wayne Randall climbed the wall and ended his charge, leaving Beechey with nowhere to go to bring an inglorious end to a drive that had seem him advance from 14th to sixth. Black pounced to depose Pascoe at the resumption and he quickly drew alongside Kane to make a bid for the lead; the duo running side-by-side until a mistake from Black exiting turn four sent Kane into the concrete and out of action. With Black banished to the back, Pascoe took control with 15 laps to run and was untroubled from this point in leading Justin Randall to the line. Remarkably, Black surged his was back through the field to secure third spot ahead of Williams, Northfield and Doyle, with McCosker, O’Keefe, Kyall Fisher and Allan Nash rounding out the top ten ahead of the only other finisher in Childs.

Last round winner Andrew Pezzutti made it no further than hot laps when Dirt Modifieds hit the track and it was fellow veteran Ray Klarich who outgunned Eggins and Sam Bruggy to win the opening heat.

Eggins started strongly in the feature race and proved a formidable challenge for Britten to overcome before spinning himself out of second place on lap 18. With Eggins no longer a factor at the front, Mitchell Randall took possession of second spot and was closing in on Britten when the chequer appeared. Corbett climbed from sixth to third, leaving Firth fourth ahead of Holland, Gary Wathen and Terry Leerentveld, who efforts to compete in two categories on the night left him below par in both. Stow, Eggins, Trevor Wiley and Marcus McKenzie rounded out the finishers. Amongst those who failed to go the distance were Russell Ward, Nick Knott, Anthony Ashen, Dale Corbett and Ray Klarich, who was using the high line to surge through the field before running out of room exiting turn four and clouting the wall to end his charge after eight laps.

Modlite heat winners were Neil Gregson, Sean Rose, Brad Dawson and Klinton Hancey, with the latter then going on to also take out the feature race. Hancey finished ahead of Steve Collins, Will Butler, Gregson, Nathan Politch, Kyle Honour and an out-of-sorts Leerentveld.

A lack of cars prevented the Late Models from making much impression, with only five cars starting the feature race and just three of these completing the 12 laps. Following the early demise of Darren Kane, when Nick Girdlestone exited on lap seven, Michael Jenner inherited the lead and subsequently retained the position to lead Steve Van Zeeland and Josh Schultz to the chequer.

The Open Sedan B feature was a romp for Ben Robertson who finished more than 17 seconds ahead of runner-up Ricky Price, with Ben Taylor besting Merv Price for third.

Sprintcars return to Ausdeck Patios Archerfield Speedway next Saturday night (December 9) for round seven of the East Coast Logistics Track Championship, along with AMCA Nationals, Compact Speedcars, Formula 500 Juniors and Ford vs Holden vs Sigma sedans.