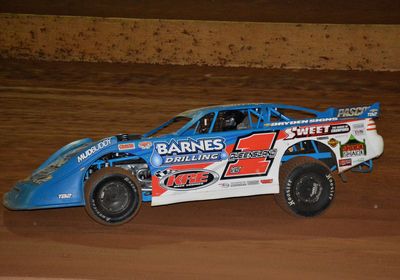 On a night that served up a series of sublime feature races, Queensland Super Sedan champion Matt Pascoe and Australian Dirt Modified champion Kevin Britten were equally impressive in masterfully dismantling their opposition to score emphatic wins at Archerfield Speedway on Saturday night (April 10). Pascoe was superb in leading throughout the 30-lap Super Sedan feature to finish ahead of Steve Jordan and Sean Black, while Britten was at his breathtaking best in the Dirt Modified feature race, leading home Mitchell Randall and David Clark.

Making their first appearance in Brisbane since November, a field of 24 Super Sedans gathered to contest round eleven of the McCosker Contracting Series. Delighted at being behind the wheel of his trusty Barnes Drilling Q1 Sweet for the first time this season, Pascoe served notice during hot laps when he cut the quickest lap of the session, outpacing Kane, Tania Smith, Gavin Northfield and Trent Wilson.

The opening heat saw Black pounce from the outside front row to round up Kane and lead the opening lap, only to head infield on the next circulation and hand the lead back to the national champ. Taking maximum advantage of his good fortune, Kane raced away to finish six seconds clear of David Musch, with Colin Kaine securing third aboard the car raced until recently by Ian Brims.

In heat two, the outside again proved the best place to be as Steve Jordan easily outpaced Nicholas O’Keeffe to lead away. Jordan would remain in control through to the chequer, while O’Keeffe would fall to third behind Sam Roza.

Pascoe was untroubled in winning heat three, leading every lap to finish ahead of Wayne Randall and Josh McLaren.

With Tania Smith in control of heat four, Pascoe set about rounding up the field around the outside to climb into second spot after starting at the back of the pack, relegating McLaren to third on the final lap.

Tyson Moon downed Trent Wilson to win heat five, with series leader Black securing third to get his night back on track, but with a big task ahead if he hoped to maintain his perfect record of top five results in every round so far this season.

The final heat saw Jordan win again, surviving a scare on lap three when he found himself unable to avoid a spinning race leader in Craig Hammond as they exited turn four. As Pascoe had done earlier, Kane used the outside to surge from the rear into second spot, rounding up those mired on the bottom and seemingly uninterested in advancing their position, the best of whom proved to be Justin Randall in finishing third.

The opening Bronze round of the Pole Shootout saw Randall and Wilson advance as Roza and McLaren exited, although Wilson would opt out of the Silver showdown. Randall was the next to fall as Moon and Kane advanced to take on Pascoe and Jordan in the Gold round. Leaving his best run for the final lap of the session, Pascoe pipped Kane to secure pole position for the feature race, leaving Jordan and Moon to start from row two ahead of Randall, Wilson, McLaren, Roza, Smith and Musch, with Black to launch from row six alongside Hayden Brims.

With Northfield, O’Keeffe and Brad Pascoe unable to take their place in the field, 21 cars faced the starter for the feature and Pascoe powered to the front at the drop of the green, leading Kane, Jordan, Moon, Randall and Wilson through the opening laps. As the race continued without interruption, Pascoe extended his lead and was into lapped traffic after just seven laps. On a track that, despite having already endured 40 events, was offering multiple grooves, Pascoe had to tread carefully as he manoeuvred his way between drivers engaged in their own battles. Jordan moved ahead of Kane to secure second on lap 14 and whilst the top two then remained unchanged to the chequer, there were changes galore back in the field. The first stoppage came with 11 laps remaining when Wilson looked to be stranded in turn four, only for him to extract himself from trouble and continue, but not before the yellows were triggered, resulting in the Townsville-based driver being ordered to restart from the rear. Almost immediately after the restart, Moon moved ahead of Kane, with Black relegating both Randall and Kane in quick succession to surge into fourth. When Craig Hammond spun in turn three to on lap 27, the field bunched for the final time and it was Black who pounced when racing resumed, immediately dive-bombing Moon in turn one to grab third. The pass looked a little dubious in its execution, but with Moon having unleashed on the lapped car of Scott Taylor earlier in the race, there was perhaps some karma at play. As the only driver to cut sub-15 second laps, Pascoe was never seriously threatened in what was an exemplary performance. In finishing second, Jordan scored his third runner-up finish in a row, while Black continued his remarkable run of results to finish third ahead of Moon, Kane, Randall and Roza. Next in line were Musch, Wilson, McLaren and Brims, followed by Smith and Taylor, who outpaced several far more experienced rivals in what was an impressive debut outing. Bob McCosker and Hammond completed the finishers as Kaine, Leigh Williams, Justin Randall, Mark O’Brien, Ed Doherty and Zac Pascoe failed to go the distance.

Back on track after a couple of seasons on the sidelines, Ray Klarich enjoyed a winning return when he outpaced Phil Roberts and Mitchell Randall to win heat two.

Randall kept Clark at bay to win heat three while Leerentveld, fresh from a successful interstate Modlite campaign, secured third on this occasion.

Geoff Phillips held on to win the final heat, despite the best efforts of Britten in his charge from the rear of the grid. Using the highline to round up the field, Britten swept past Andrew Firth through turn two on the final lap and would fall less than half a second short of reeling in the lead.

Despite starting from pole position, Britten trailed Randall for the opening lap before surging into the lead and leaving the rest of the field in his wake. In a race that would run without interruption, Britten was spectacular in his dealings with lapped traffic, charging around the outside in a blistering display that would ultimately leave just five of the 17 starters on the lead lap. Having started alongside Britten on the front row, Randall remained second at the flag ahead of Clark, who started sixth but had advanced to third after just three laps of racing. Leerentveld and Phillips rounded out the first five, with Klarich the first of the lapped cars in sixth, followed by John Lodge, Firth, Scott Quirk and Roberts. Completing the finishers were Josh Rose, Luke Dunn, Jay Davey, Jack Pezzutti, Taylah Firth and Darryl Armfield, with McNamara the only retiree.

Round seven of the Shock Absorber Therapy AMCA Nationals Track Championship certainly delivered an emphatic demonstration of why so many fans are such strong advocates for a return to fastest-from-the-rear feature race formats. With the entire 16-car field inverted for the 20-lap feature race, Rob Turner and Dylan Stacey would find themselves sharing the front row and it was the latter who raced to the front and set about distancing himself from the field. Of those charging from the back, Queensland champ Tony Blanch was leading the way, scything through the field to loom large in second spot after just nine laps. By lap 13, Blanch had bridged the gap to Stacey and surged to the front. With a podium spot still looking likely, Stacey unfortunately headed infield two laps later, elevating Matt Hardy into second spot ahead of Bruce Marshall. In a race devoid of any restarts, Blanch seemed a certain winner, only for a clash with a lapped car through turn two on the final lap enabling Hardy to move ahead and secure his second Archerfield success for the season. Marshall also usurped Blanch to finish in second spot, leaving Blanch to rue a missed opportunity as he recovered to salvage third. Fourth to the flag was Tim Gamble, followed by Turner, Brett Robotham, Mark Taylor and Jim Knight.

Marshall won both of his heat races to earn the honour of starting last in the main event, while Hardy and Steve Price prevailed in the other preliminaries. A flat tyre in his second heat and further problems in the feature would prevent Price from making any further impression, while series leader Steve Potts was an early casualty when he became entangled with Jay Allen in his second heat race and took no further part in proceedings.

Queensland champ Bodie Smith was unstoppable in Compact Speedcar action, winning both heats before also taking out the feature race. Having set a cracking pace in the opening stages of the feature race, Mitchell Rooke saw his advantage disappear when Chris Therle-Thrussell whacked the turn three wall on lap five to trigger a restart. Although Rooke would continue to hold sway when the race resumed, a solitary error though turn two with three laps remaining proved very costly indeed, enabling Smith to slip underneath and assume the lead. Rooke remained second when the chequer appeared, followed home by Harry Stewart, Dave Collins, Dion Wilson, Clay Seabourne and Richard Rooke.

Following heat wins to Daniel Taylor and Wayne Kirkman, it would be the latter who also prevailed in the RSA Outlaw Sedan feature race, downing Glen Lesslie and Taylor.

Hans Van Der Ryken and Matthew Hannigan were heat winners in Limited Sedans, but neither would go the distance in the feature as Aaron Buchanan emerged victorious in advance of Aaron Stone, Brock Armstrong, Greg Trezise and Luke Frisina.

Robin Bains and Brad Trussell shared the spoils in the Open Sedan A heats before Trussell would emerge the feature winner by default as the only finisher in a chaotic race. In Open Sedan B action, heat wins fell in favour of Hayden Grantz and Ricky Price, who would also go on to snare a feature race win, downing Robert Gorman, Elgan Dalton and John Woolf.

Ryley Smith won two Junior Sedan heats and then followed up to take the feature over Connor Reeves, who won the only other heat race. Tyler Burnham filled third in the feature and was followed home by Jeremy Wade and Jack Betts.

The Ford vs Holden vs Sigma feature race went to Kim Dack over Will Kelly and Linkon Allen.

Racing continues at Archerfield Speedway next Saturday night (April 17), with round ten of the East Coast Logistics Sprintcar Track Championship and round nine of the TFH Midget Series, along with Wingless Sprints, Formula 500s, Modlites, Lightning Sprints and Stockcars.