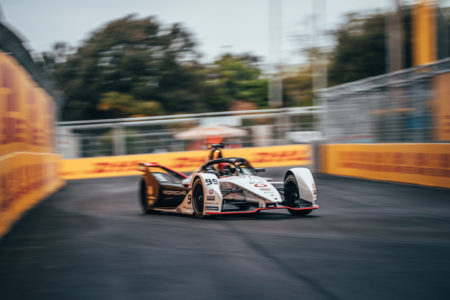 The first podium of the season for the TAG Heuer Porsche Formula E Team: In the No. 99 Porsche 99X Electric, Pascal Wehrlein (GER) claimed third place at the Rome E-Prix on Sunday after a gripping race against tough opposition. His teammate André Lotterer (GER) finished the fourth round of the ABB FIA Formula E World Championship contested in the Italian capital in position 15.

Race 4
In the fight for the Super Pole, Pascal Wehrlein left a strong impression with the third quickest time. In the early stages of the race, he moved into second place with the Porsche 99X Electric and, with a thrilling overtaking manoeuvre, took the lead shortly afterwards. This was the first lap at the front of the field for the TAG Heuer Porsche Formula E Team. On the 3.385-kilometre street circuit in the district of Esposizione Universale di Roma, however, he was unable to maintain this position for long. First, he had to allow his strongest pursuer, who was in Attack Mode, to pass. He lost another position at the restart after a full course yellow. Although he ultimately saw the flag in fourth place, the TAG Heuer Porsche Formula E Team had every reason to celebrate: Since the third-placed driver was retrospectively disqualified for using too much energy, Pascal Wehrlein inherited third place – at just his fourth race for Porsche.

His teammate André Lotterer, who has previously climbed the podium twice in Rome, had to start the race from the second to last grid row. After using too much energy during the qualifying session, his fastest lap in the Super Pole was voided. The TAG Heuer Porsche Formula E Team then decided to replace the powertrain of the No. 36 Porsche 99X Electric and accepted a 10-second stop-and-go penalty in the race.

Comments on the Rome E-Prix, Race 4

Amiel Lindesay, Head of Operations Formula E: “We’re thrilled about our first podium of the season. That was a positive surprise at the finish. The conditions weren’t easy, but we were strong. We’ve made good progress since the start of the season in Diriyah. We were at the front in qualifying, but ultimately we now have to implement that in the race. Today we were close. Pascal’s third place is a result on which we can build for the next doubleheader in Valencia.”

Pascal Wehrlein, Porsche works driver (#99): “That was a good day for Porsche and me. To climb the podium at the fourth race of the season is a great result. I’d like to thank my team for their hard work and tremendous support. Still, when you take the lead, you obviously want to win. Unfortunately, that wasn’t possible today because – like in Diriyah – we lacked a bit of speed in the race. Still, we’re on the right track. I hope that by Valencia we can take another step forward.”

André Lotterer, Porsche works driver (#36): “Like in Diriyah, that was a tough weekend for me with no points. Nevertheless, I think we’ve once again underlined our potential. Pascal’s podium result motivates the whole team. There are still some minor details that we need to work on to be able to achieve our first win in Valencia.”

Coming up
The next event for the TAG Heuer Porsche Formula E Team is the Valencia E-Prix on 24/25 April with races 5 and 6 of the ABB FIA Formula E World Championship.