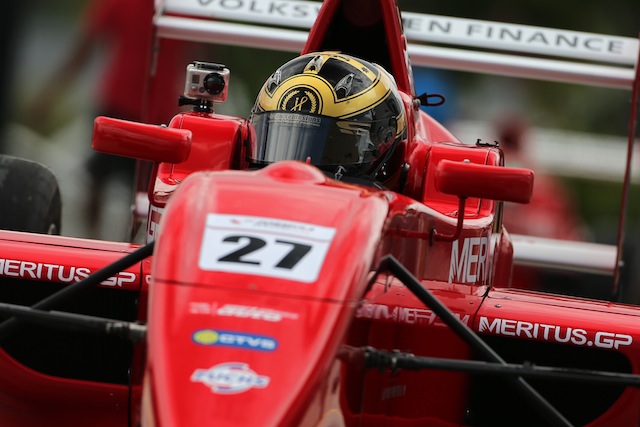 Australia’s Jake Parsons, the 2014 AsiaCup Series champion, has signed for Meritus.GP to contest the full Formula Masters China series – with an eye on a test schedule and a future racing in Mazda’s Road to Indy.

Parsons is fresh from scoring a win and setting a new lap record in his first Formula Ford race on Australia’s famed Bathurst circuit.

In 2014, Parsons competed in the second half of the Formula Masters China series in between being on way to winning the AsiaCup Series title.

In his Masters campaign, from the 10 races he started, Parsons scored three wins from his seven podiums, and claimed fourth place in the overall points, marking him as a pre-season favourite for 2015.

“I’m delighted to be racing in the Formula Masters China series full-time in 2015,” said Parsons.

“I know the Meritus.GP team well, the team ran the car I won the AsiaCup Series title with, and I made my Masters debut with them too. We won three races last year in half a season. We know what we have to do this year.”

Parsons intends to dovetail his racing in Asia with testing schedule in the United States in the Road to Indy development ladder.

The program encompasses F2000, Pro Mazda and Indy Lights scholarships on the progression to the IndyCar Series in the United States. Parsons has already tested F2000, and most recently a Pro Mazda car at Sebring in 2014.

“I want to look to America and a single-seater career there, and where that could lead, whether IndyCars or Formula E,” Parsons adds. “The structure is very good for bringing on young drivers like myself.”

Peter Thompson, co-owner of the Meritus.GP operation that will run Parsons in Formula Masters China said: “We are delighted to continue working with our AsiaCup Series champion Jake Parsons again in 2015.

His success last year shows we have a winner, and I expect more of the same this year.

“Meritus.GP took first and second positions in FMC in 2013, and with Jake’s three wins at the end of last year we know we have a winning package.”