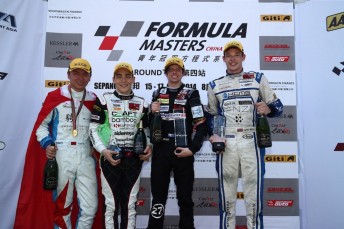 Calling it the toughest race he’s competed in so far, Parsons pulled ahead of pole-sitter Solomon of Eurasia Motorsport on the fifth lap to cap off a strong FMCS debut weekend.

Third on the podium was Briton Dan Wells (22) of Cebu Pacific Air by KCMG, after getting past team mate James Munro (17) of New Zealand who finished fourth.

Series newcomer Philip Hamprecht (17) of Super License rounded out the top five after the German drove through the field to score his best result of the weekend’s three races.

Star Racing Academy driver Yuan Bo of Eurasia Motorsport, who crossed the line seventh behind Zen Motorsport’s Yin Hai Tao in Race 12 before being given a penalty for a jump start, was named the best Chinese driver of the weekend.

Munro continues to lead the FMCS Drivers Classification, although his lead has been cut to just 14 points with Solomon’s two wins in Races 10 and 11 and second-place finish today.

Indonesia’s Darma Hutomo (16) of Humpuss Junior Racing Team is fourth in the championship, with Parsons now fifth overall. Yuan continues to increase his lead in the Best Chinese Driver Trophy.

As a reward for their stellar performances in the first half of the season, Munro, Yuan and Indonesian Andersen Martono (17) of Meritus GP will take part in an exclusive test tomorrow in cooperation with the Audi R8 LMS Cup.

Testing an Audi R8 LMS Cup car, the three drivers will have a unique opportunity to impress series representatives and showcase their talent and racing abilities.
The dramatic Race 12 saw pole sitter Solomon get off to a strong start, with Parsons overtaking Wells to move into second.

As Wells stayed close behind in third, Munro, who started from fourth, fell back and Star Racing Academy driver Bao Jin Long of Zen Motorsport moved up from fifth to fourth.

Parsons continued to press Solomon and on the fifth lap found a way past the Hong Kong driver on Turn 4.

Wells, too, was attempting to score his first series win and he attempted to get past Solomon.

He spun and fell to fourth, behind Munro, who had fought his way back up to fourth. The two would battle over the next three laps until Wells found a way past Munro on Lap 8.

Behind the leaders, team-mates Bao and Yin battled, with Hamprecht joining the mix.

Unable to qualify due to an incident in free practice, Hamprecht started from last on the grid but ferociously drove through the field, eventually getting past Yin on Lap 6 and past Bao two laps later.

Formula Masters China Series will next be in action in September for Races 13-15 at the Zhuhai International Circuit. Race 3, rescheduled from a round at Zhuhai earlier this year, will also take place for an action-packed four-race weekend.

Jake Parsons/Meritus.GP/Winner Race 12
“That was the toughest race I’ve had to do – very intense. It was a tight battle sitting behind Matthew [Solomon] for a few laps and then working on finding a way past him. I got a good run at him and got past and then was able to get myself some breathing space. I didn’t believe it when I got to the finishing line first and just kept pushing, even when I went past it. I am very happy to have won and to have had the opportunity to race here. The car was fantastic to drive and I really enjoyed the whole weekend.”

Matthew Solomon/Eurasia Motorsport/2nd Race 12
“Well done to Jake, he did a good job. It was very hot today but all excuses aside, we just did the best we could. I am still happy to have finished second and to have pulled some points back on James [Munro] in the championship. It’s a fantastic position to be in, the perfect position from which to strike now. So I am happy with the result after a very good weekend.”

Dan Wells/Cebu Pacific Air by KCMG/3rd Race 12
“It was an enjoyable race. I didn’t expect Jake to come past me on the first lap. A couple of laps in I thought if I want to win this race I have to get past Matt now and then make a run. But I had a little spin and from there I just wanted to make sure I got on the podium again by getting past James [Munro]. From here I am looking forward to the final two rounds of the year and actually wining some races.”

Yuan Bo/Eurasia Motorsport/Best Chinese Driver
“I am very happy to be Best Chinese Driver. I have been getting a lot of support this year, from my coach and from the Star Racing Academy, and I think it is really helping me. The car has been great and I feel competitive. From here I am looking forward to the next races in Shanghai and Zhuhai and I hope I can keep improving.”