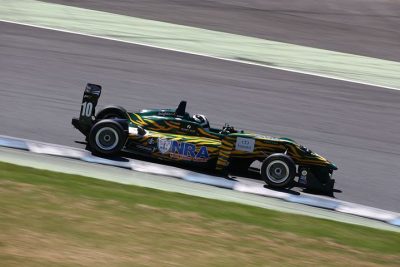 As the Japanese Formula 3 Championship returns to the Okayama circuit for the second time this season, Australian driver Jake Parsons is eager to use all the lessons he learned there to continue his impressive form. Coming off another three class victories at the last round, the 23-year-old is also keen to take the fight to the higher specification Championship cars.

“The last round we had at Okayama was really good, so we have a great base from all the data, especially as it’s our ‘home’ circuit. We’ve been working on some developments too, which should give us a better chance at being more competitive with Championship cars. So, we’re really excited to try those and keep pushing our own boundaries.”

Parsons is looking forward to returning to the fast 13 turn, 3.703km/2.300mi Okayama circuit, which used to play host to the F1 Pacific Grand Prix.
“I really like the high-speed sections here, with turn one and two my favourite spot. It’s a bit like Sepang, but the shape and camber are different, making it quite challenging. I always like those high-speed, double turn areas, with quick transitions from one to the next. It’s a fun layout, so I’m keen to get back out there, especially as that’s one of my strongest spots compared to the C Class cars too.”

During the season, Parsons and his Noda Racing Academy team have made strong, positive progress at every round, but the young Australian is still setting more targets for the remaining races this year.

“Consistency has been the big theme for us this year. Our last race weekend was actually our most consistent, so it’s important to keep that going forward. I also want to push my pace more and keep learning about the F3 car, as we’re in a competitive spot but I want to keep stepping that up. I want to optimize everything I can and gain as much knowledge as possible before progressing further into the Japanese motorsport scene. Everything I learn here is a building block to being prepared for the next level, like a university.”

Tokyo based Parsons has been thrilled by the amazing support he’s received from the extremely knowledgeable and passionate fans in Japan over the last two years.

“I hope the fans have enjoyed the journey from last year into this one. Thank you for all your support at each round, as some races can be challenging but it’s always so uplifting to have your support and positivity. I really appreciate that and hope you’re as excited about the future as I am.”

Round seven of the Japanese F3 Championship takes place at Okayama on 8-9 September.