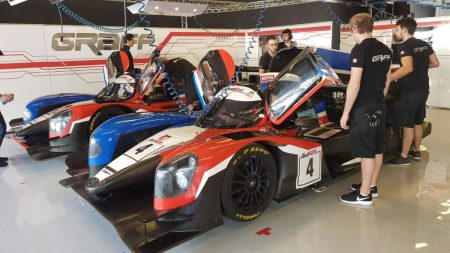 Australian star Jake Parsons is set to round out his impressive and successful 2018 by competing in the famous Gulf 12 hours endurance race in Abu Dhabi this weekend. The 23-year-old will reunite with the experienced James Winslow to drive in the LMP3 class for Team Graff.

“I’m really looking forward to this weekend at Yas Marina. I’ve driven the Bathurst 12-hour race before and this will be my longest LMP3 event so far. I always see these long-distance races like a journey, as there’s such a lot happens between when we start and finish. I really enjoy that aspect of endurance racing. I’m actually staying at the circuit hotel and, as I’m sitting here looking out on the track, I just can’t wait to get out there now. It’s great being on site, but it’s a bit of a tease too!” explained the young Australian racer.

Alongside winning the Japanese F3 National Championship, Parsons had two impressive outings in the FRD LMP3 China Endurance series this season, driving with Winslow. The pair claimed victory in Parsons debut event, followed up by strong podium finishes, and are now looking forward to teaming up again with successful French team Graff at Abu Dhabi.

“Although I’ve not driven with Graff before, I’ve seen the team compete in many series, including European Le Mans. They’re a very strong, world renowned team, so I’m very excited to work with them for the first time. It’s obviously great to be driving with James [Winslow] again too, as we’ve built up a very solid partnership. We get on well and, as our driving style is very alike, our feedback is often very similar, which is a huge benefit. With the success that we’ve had I can feel confident we’ll be competitive and that we have the right package to have a positive weekend.”

The Yas Marina Formula 1 circuit is a new one for Parsons, who is keen to experience and learn the 5.554km/3.451mi, 21-turn Hermann Tilke designed track’s unique challenges.

“I’ve been watching onboard footage and I’m really excited to drive it after seeing the level it’s at, definitely right up there with the likes of Shanghai and Circuit of the Americas in Houston that I’ve driven before. It doesn’t change my preparation that it’s an F1 track, as knowing it’s a high-level circuit gives you a positive feeling and focus. I can tell already just from the layout that it’s going to be one of my favourite tracks.”

On the back of a season of great success and growth as a driver, Parsons is looking forward to channelling the many skill sets he’s developed into ending the year on a high and building for the new season ahead.

“My objective is to get myself dialled in and up to speed as quickly as possible, getting the car into a good spot then we can apply the best strategy for the race. I want to get the maximum out of my time in the car and we’re all working together for the best result. There is every indication it is going to be a good weekend. So, I’m feeling pretty good about it all, and genuinely can’t wait to get going now.”

Tokyo based Parsons is especially grateful for the exceptional, loyal and passionate support he’s received this year, adding this message for his fans. “Huge thanks to everyone who has followed me this season, through my progress in Asia and now into my first race in the Middle East. Thank you for all your support. Here’s to another good weekend and being in a great position to keep building and developing my career in 2019.”