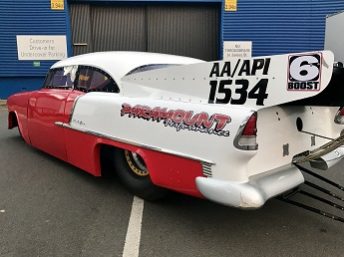 Anita & Terry Seng of Paramount Performance are very excited to announce they are partnering with Les Winter Racing. One of the world’s most powerful, if not the most powerful Factory Block and Headed LS engines will be calling the 1955 Chev 2 Door ex-Top Doorslammer home in the coming days.

Les Winter needs no introduction to the more senior members of the Australian drag racing community. But for those readers who don’t know, Les was one of the first Wild Bunch racers in Australia, as well as the owner/driver of the second 6 second Doorslammer in Australia, after John Zappia.

Of course Terry knew who Les Winter was, but had never seen the impressive 55 Chevy in it’s heyday. Nor had he actually met him, until Les introduced himself, in of all places, the USA at Drag Week last year.

“Things just continued from there” recalls Terry. “We had been chatting about the performance of LS combinations and someone mentioned world records. We believe we have the Fastest & Quickest Factory Block and Headed LS in the world at the minute at 7.37 seconds @ 187mph over the quarter mile. I understand Mike Moran holds the outright Factory block LS world record with a 6.866 @205mph”.

Les, who is currently racing and spending time in the USA, shared with us from his Fort Worth Texas base “I had been admiring the performance and power Terry had been making out of that little engine, and the way he carried himself with a humble professionalism guiding his obvious passion”.

He continued, “I knew how good it made me feel over my years of racing, when people helped me out with support, and I wanted to give something back and to be able to do it with such a no carry-on, mature-beyond-his-youth guy. It was a great opportunity I just couldn’t let pass by”.

Terry explains “When Les suggested, after a couple more casual chats, that I come down and ‘Just take a look at his car’ I accepted and drove to his headquarters. It was such a good looking car and I straight away felt very comfortable. It fits me perfectly”.

There is a real buzz around this project in Australia right now. Old school style, it doesn’t get any cooler than a chop-top 1955 Chev 2 door drag car, meeting twentieth century LS Twin Turbo power and technology. Terry, with street cars in his blood, enlisted Steve from Team Bray Racing & his brother Jason to give the Chev more of a street car look, re-fiberglassing the front and adding the Iconic Chrome Bird. “I think it would be the only Flat Bonnet 55 Chev race car I have seen at the drags” says Terry.

Also, thoughts quickly go to the advantages of the at-track maintenance being much easier, with the easy access of a purpose built race car, and that the 7.37 came in the 3440 pound (1564Kg) VC Commodore that has terrorised “Australia’s Fastest Street Cars” for a few years now.

Work is continuing at fever pitch to make the LS feel at home in it’s new 1955 body and the team look forward to putting on a stellar performance at the track at the 50th Australian Winternationals in June.