Despite the fact that he still runs a 253ci engine amongst a field of 350ci Chevs in what is his 22nd season in speedway, Terry Pankhurst has well and truly held his own against his rivals in the AMCA Nationals class this season, successfully claiming back to back victories in the overall East Coast Series. 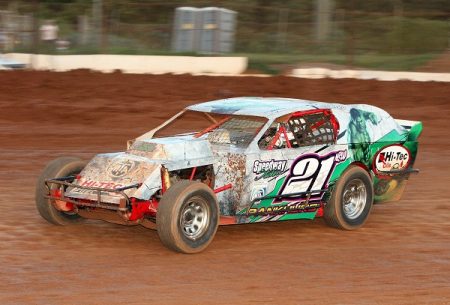 Running on a small budget and doing much of his mechanical work, race preparation and race meetings by himself, the Gosford, NSW-based driver is proof that determination and hard work can stand up to the newest equipment.

Spending many late nights in his shed working to improve the reliability of his NSW # 21 MTA NSW / Hi-Tec Oils supported Redline Mach 1 car, Pankhurst’s efforts well and truly paid off this season, with his consistency rewarding him with back to back East Coast Series victories.

Banking invaluable points during each of the five contested East Coast Series rounds at Sydney’s Valvoline Raceway, Pankhurst managed a clean sweep during one of the series rounds, which helped to cement his place atop the point standings, while also picking up a pair of runner-up finishes, a third and a fifth.

Having gone back to back in the Country Cup in previous seasons, Pankhurst’s East Coast Series win also have him an opportunity to write his name into the history books as the only driver ever to achieve a successful defence in both of these point scores.

“We may not have the newest gear, but the fact that we’ve been able to remain competitive, particularly against some of the younger drivers who are really starting to make their mark, means that I’m still doing something right as a driver,” said the 42-year-old, who this season was racing in honour of his long-time friend and sponsor Phil Armitage from Street Neat Welding, who sadly passed away last year.

“There are a number of drivers who I hold in high regard and to have my name thrown around with theirs is a real honour and something I’m quite proud of. Overall, it’s been a really strong season for us, so we’re keen to continue that trend next season.”

Special thanks go to Kevin Wrobel, and Owen and Cameron Scott, along with Pankhurst’s wife Michelle and their two sons Travis and Lewis.

To find out more about Pankhurst and his team, LIKE them on Facebook by searching Pankhurst Motorsport.