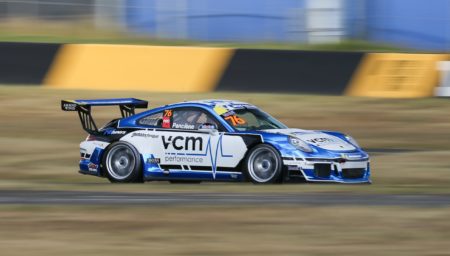 Clear skies and cool conditions greeted Porsche Michelin Sprint Challenge teams as they rolled out for the first sprint race of the weekend at Sydney Motorsport Park.

After dominating both Friday’s practice sessions and narrowly missing out on the qualifying window to take pole in the Mobil Pro class the previous evening, Christian Pancione made the perfect start from the front row to lead his McElrea Racing teammate, Ryan Suhle, and the rest of the chasing field through Turn 1.

Pancione’s pace was blistering in the opening stages, lapping over a second faster than anyone in the 21-car field. The VCM Performance driver would quickly amass a 3 second advantage over his McElrea Racing teammate and control the race fairly effortlessly to the flag.

Suhle would finish a hard fought second after coming under heavy pressure from Callum Hedge in the early laps after out breaking himself into turn 2. Hedge would eventually cross the line 4 seconds behind the Queenslander in third with Bayley Hall and Courtney Prince rounding out the top five.

After a treacherous qualifying, Sam Shahin would overcome Sergio Pires early in the Morris Finance Pro Am battle and take the lead into turn 2. Despite being plagued with brake bias issues, The Bend Motorsport Park owner would take the class win ahead of Pires and Matthew Belford.

One the most impressive drives of the race, was from Shahin’s teammate, Tom Taplin, who would make up over 14 places to finish in seventh overall. The most entertaining tussle for spectators lining the Sydney Motorsport Park circuit however, was in the Morris Finance Pro Am mid field, which saw Marcel Zalloua, Michelin Junior Madeline Stewart, David Greig and Ross McGregor embroiled in race long battle.

As Pancione had used his second allocated set of Michelin control slick tyres in qualifying, many expected the 19-year old to fade in the second 45-minute endurance race. But as in Race 1, Pancione made a clean start and built an early lead lapping four tenths quicker than Suhle. Both Pancione and Suhle gradually pulled away from Callum Hedge and Bayley Hall, with the series debutants matching the more experienced front pair for pace in the early stages.

While a short delay when lapping a backmarker toward the end of the race looked like it may rob Pancione of his second race victory, he absorbed the pressure from suhle and maintained his advantage to the line.

Sam Shahin would continue to dominate Morris Finance Pro-Am in Race 2. Despite issues with his HTFU liveried Porsche 911 GT3 Cup’s cooling and steering systems, the South Australian had pulled out a 10 second advantage with 20 laps remaining and eventually cross the line over 20 secs ahead of his nearest competitor, Sergio Pires.

Pires recovered from an early altercation with Matt Belford into turn one on the first lap and was followed home by David Greig, Michael Hovey and Graham Williams. One of the stand out drives of the second race was that of Hovey, after starting from the back of the field due to a gearbox issue in the first race, the Morris Finance Pro Am made up 12 positions to finish in ninth overall.

The third and final race of the weekend takes place at 14:05 local time on Sunday and will be broadcast live via the 7Plus app.