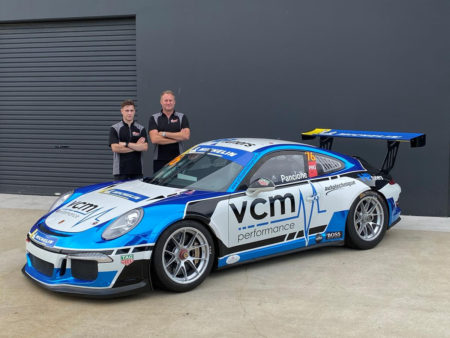 Christian Pancione to continue his ascent up the Porsche Motorsport Pyramid with McElrea Racing for the 2020 Michelin Sprint Challenge season.

Backed by VCM Performance and HP tuners, the 18-year old has already amassed an impressive racing resume with podium results in both the Australian Karting Championship and Victorian State Championship.

Before starting his ascent up the Porsche Motorsport Pyramid in 2018, Pancione had already claimed both the 2017 Val Findlay Junior KA3 Karting Championship and Queensland Junior State OKJ Championship. The Porsche Michelin Sprint Challenge series provided a natural progression from top level karting into Porsche’s proven pathway, with Pancione claiming six race victories and the Class B title in only his first year of competition in 2018.

Last year, the Michelin Junior impressed again in the Pro class with consistent top 5 performances including pole position, lap record and 2nd overall at Round 4 of the series at the Queensland Raceway.

Pancione is the second young, Melbourne driver to join the Queensland team, after Cooper Murray joined McElrea Racing midway through last season. Murray immediately tasted success under the mentorship of the team and experience of teammate Warren Luff, with a commanding 3 race victory in Townsville. In the process Murray became the youngest race winner in series’ history and went on to record strong podium performances in the second half of the season.

Pancione will be looking emulate that success under McElrea Racing’s guidance as the team has a proven track record of developing future champions – having supported both 2016 Porsche PAYCE Carrera Cup Australia champion and Porsche factory driver, Matt Campbell as well as 2018 Champion Jaxon Evans, who will this year again contest the Porsche Mobil 1 Supercup Championship as a Porsche Junior driver.

On the announcement McElrea Racing Team Owner, Andy McElrea said, “We are absolutely thrilled to get our hands on Christian for the 2020 Porsche Sprint Challenge, and beyond. When he pipped our boys in qualifying at our home track last season, we certainly started taking more notice! He’s got plenty of raw speed, good support and all the ingredients to be another of our successful pro drivers. We can’t wait to extract his full potential in 2020.’

Christian Pancione said, “I am very excited to join McElrea racing in 2020. Last year we saw good success, finishing 4th in the Pro class after winning Class B in 2018, but this season is an important step in my career and joining the reigning champions from last year was a logical move. I look forward to the fight for the championship this year and hopefully continuing McElrea’s success.”

Pancione retains the same headline sponsor and livery as last year, “We received a lot of good responses on the livery, so we aim to keep it similar. We have a few new opportunities in the pipeline, but we aim to strengthen our current sponsor/partnerships and hopefully bring on a few more before the start of the season….Watch this space!”

Round 1 of the Porsche Michelin Sprint Challenge season takes place from the 27-29 March at the Sydney Motorsport Park in NSW.