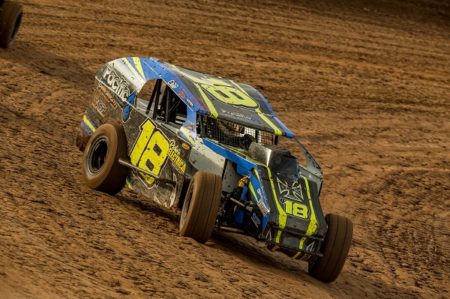 Over the weekend at Hession’s Auto Parts Grafton Speedway, the 2020-21 season concluded, and in the headlining act – the NSW Modlites Title – it was Queensland visitor Rodney ‘Rocket’ Pammenter who came away with the victory.

The Toowoomba, Queensland-based racer battled it out for the second half of the 25-lap NSW Title deciding feature race with defending champion and fellow Queenslander Klinton Hancey, but Pammenter went on to prove his class by greeting the chequered flag as the winner.

Despite his best efforts, Hancey, who is a multiple Australian Title holder in recent years, was unable to hold onto his NSW Title crown and consequently had to settle for second place on the podium.

Rounding out the podium finishes in third and making it a trifecta for the Queensland driver was Nathan Politch.

Just outside the podium finishes in fourth was Rodney’s son Mitch Pammenter, who finished ahead of Callum Beerling (Qld), the best of the NSW-based contenders Will Butler, local Jared Stephenson, Chris Fing (Qld), Steve Collins (Qld) and Glen Hoogwaerts (NSW).

One of the favourites heading into the NSW Title event, Terry Leerentveld from Queensland, unfortunately crashed during the final round of heat-race action. Despite the best efforts of him and his team to repair the crash damage, the former Australian Champion was unable to take his place in the feature-race field.

In the V8 Dirt Modified action, local Andrew Firth managed to come out on top in the feature race after he had qualified on pole position for the 20-lap event. The Hession’s Auto Parts proprietor went on to defeat Scott Quirk and Joshua Rose in second and third place respectively, while youngsters Luke Dunn and Zak Blanch completed the top-five finishers.

The AMCA Nationals resulted in the feature-race spoils going the way of another local in Tony Blanch. The current and two-time Queensland Champion was joined on the podium by Paul Reeves in second and local Tim Luscombe in third.

Saturday afternoon’s action concluded what has been an impressive 2020-21 season, and the team at Hession’s Auto Parts Grafton Speedway would like to thank everyone for all of their support, which includes fans, competitors and officials, and the promotion team are now working hard on preparing to make the 2021-22 season even bigger and better. Stay tuned for exciting announcements and latest updates in the coming months.