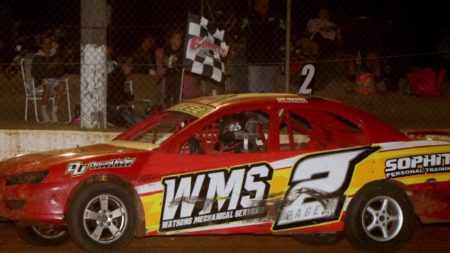 Gympie’s Mothar Mountain Speedway is the track that Chris Pagel calls home and it was very fitting last Saturday night that he was able to capture his third Queensland Production Sedan Title success there.

“To win my third Queensland Title was a massive thrill, and what made it even better was the fact that I was able to do it at my home track in front of all of my family and friends,” the Gympie, Queensland resident said, who started the feature race from position three after he had earlier in the event picked up two wins from his three heat races.

“The Production Sedan class is growing with every passing season in Queensland and that in turn means the competition level continues to lift, so to be able to pick up my third career Queensland Title win makes it all the more rewarding.”

As the son of one of Queensland’s leading speedway racers for over the past three decades, Gary Pagel, it brings a level of expectation for Chris Pagel, but after five seasons of racing speedway around his home state, he has been able to carve out his own reputation.

“In the beginning, there was a little bit of pressure (being the son of Gary Pagel), which was mainly pressure that I put on myself, but these days it doesn’t really bother me as much,” explained the driver of the Qld # 2 Watsons Mechanical Services supported VY Holden Commodore, whose previous two Queensland Title wins have been at Maryborough Speedway (2014-15 season) and Kingaroy Speedway (2017-18 season).

“People tell me that dad and I have a lot of similarities when it comes to our driving styles, which certainly isn’t a bad thing, as he has achieved a lot in speedway.

“Having dad in my corner is a lot of help and it’s his experience that he is able to pass on to me and it’s played a big part in my success out on the track.”

Since starting in speedway five seasons ago, Pagel has been based in his home state of Queensland, where he runs regularly at his home track of Mothar Mountain Speedway.

“The town of Gympie has produced a lot of fast racers over the years who have gone on to achieve major wins across a range of classes,” said Pagel, whose best finish in a National Title was a sixth in the 2017 running of the event at Wahgunyah Speedway in Victoria.

“Gympie is regarded as one of the most unique tracks in the country with the dogleg corner and its up and down configuration, and it really teaches to race, as the track requires you to really keep you racing line and keep up your momentum. It’s these skills that help you when you go and race at other tracks.”

The next event for Pagel is going to see him travel to Lismore Speedway in Northern NSW to contest the East Coast Grand National event on the Saturday night of March 14 that is set to pay $2500 to the winner.

Pagel is currently in search of additional sponsors to join his team. Interested parties can contact him via his Facebook page or by calling him directly on 0437 435 918.