Paddon all set for Rally Australia

Paddon all set for Rally Australia 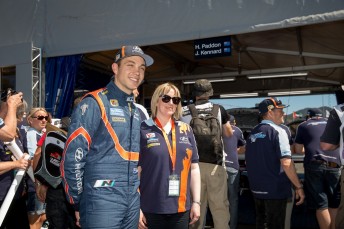 With today’s shakedown sessions now complete, Kiwi rally stars Hayden Paddon and John Kennard are all set for the next three days of international competition as the 2014 World Rally Championship’s tenth round takes place in Australia.

Paddon has been looking forward to the 12-14 September running of the Coates Hire Rally Australia all season.

“It’s nice to return to an event we know and where we have also had some good success in the past,” says the Hyundai Motorsport driver from the Coffs Harbour service park.

“Our preparation this week has gone well. From recce, the roads are in great condition, maybe even better and with a harder base than last year.

However, the roads are quite challenging in places, particularly the Friday’s six country stages before the super special back in Coffs.

It’s crucial to do well on Friday to set you up for the rest of the event, as Saturday’s stages include the long 48km stage which has a heavy covering of gravel that will be tough to sweep. Saturday’s start order is determined by reversing Friday’s classification order (or overall position) of the WRC cars, hence why we have to push from the start.”

Paddon and Kennard joined the ten other WRC crews, including Hyundai team-mates Thierry Neuville and Nicolas Gilsoul, and Chris Atkinson and Stéphane Prevot, for the official shakedown runs today. This is the team’s key opportunity for a high speed test on a road similar to the rally stages to check that all is as it should be with the car.

“Shakedown confirmed that the setup we have selected is right on track,” Paddon says. “The car’s feeling good and John and I are both looking forward to the action getting underway tomorrow.”

Friday’s action sees the WRC crews running in championship order on stages to the south of Coffs with the six country stages varying from high-speed shire roads to tight and technical forest tracks.

A loop of three tests is tackled in the morning and repeated in the afternoon before two runs of the super special in the evening.

On Saturday crews head further south to a selection of hard-based shire roads west of Nambucca Heads, including the monster Nambucca stage which, at 48.92 km, is one of the longest of the season. On Sunday the action moves north of Coffs to three stages run morning and afternoon to complete the event.