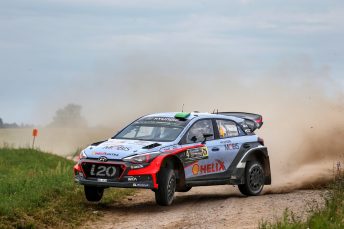 Hayden Paddon and Sebastian Marshall are looking to build on the focus and pace they showed at Rally Italia Sardegna as they prepare for the 29 June to 2 July running of Rally Poland.

The Kiwi-Brit Hyundai Motorsport duo head to the eighth World Rally Championship of the season determined to amplify the positives and eliminate the errors which have marred recent results.

Fresh from a short, half-day test for the super-fast Polish rally, Paddon says: “We will do as we have for previous events and focus only on our own driving and rally. Obviously, there’s a need to eliminate the mistakes from Sardegna and we have made some small changes to prevent those happening again.

“Poland is a rally that suits my natural driving style, so we will try to be competitive at the front.”

Having used the short pre-Poland test to finetune the settings for his Hyundai i20 coupe world rally car in preparation for the softer, sandier type of stages ahead of them, Paddon is keen to see the condition of the stages during recce.

“With the softer nature of the stages, the sweeping effect is not as great as somewhere like Sardegna. If the road is too soft, it can also cut up quickly, so it’s hard to say at the moment what will be the most favourable road position,” he says referencing his starting position of eighth for Friday’s opening leg, which stems from him being eighth on the WRC drivers’ championship points-table.

Competing for the fourth time at this event based in Mikolajki, several hours north of the capital Warsaw, Paddon says: “I really enjoy Poland; it’s one of the fastest events on the calendar. Generally, there is some room for error, so you can push a little more. It’s a rally that rewards commitment and bravery which I like.

“The majority of the event will be done using soft tyres, as tyre wear is often not too bad here. The weather could be changeable as we saw last year when rain on the final day made the stages extremely slippery, but generally we expect the warm summer conditions to make for a warm rally.”

Marshall is also competing in Poland for the fourth time, the second time in a WRC car.

“It’s a very different challenge to Sardinia,” Marshall says. “The roads are exceptionally quick on a soft surface so you need to adopt a different mentality to last time out. The margins between drivers are usually small so to try make a difference and be fastest you have to be pretty brave some times!”

Paddon and Marshall will be in the #4 Hyundai i20 coupe world rally car, while Hyundai Motorsport team-mates Thierry Neuville and Nicolas Gilsoul, and Dani Sordo and Mark Marti are in the #5 and #6 Hyundais respectively.