Paddon and Marshall looking for the enjoyment of competition in Sardinia

Paddon and Marshall looking for the enjoyment of competition in Sardinia 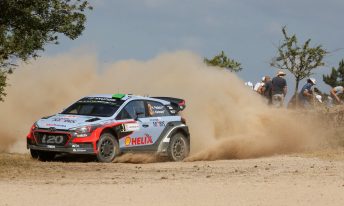 The new Kiwi-Brit combination of Hayden Paddon and Sebastian Marshall seek to find the passion and enjoyment of competing at the highest level of world rallying, rather than results, as they head to Rally Italia Sardegna this week.

Paddon says he’s keeping the same mindset as the previous FIA World Rally Championship round in Portugal. “We’re not result focused, but are keeping our focus on having a clean event and enjoying it. If we can do that, the result will naturally come.”

Recent news that Marshall will remain in the co-driver’s seat, replacing long-time Kiwi co-driver John Kennard who was due to conclude his WRC co-driving duties in July’s Rally Finland, is both sad and positive for Paddon.

“It’s obviously a shame with the news with John, but I’m very excited to develop the already very strong relationship with Seb,” says Paddon who has been testing with Marshall alongside for several months as part of the planned change. “Things between Seb and I worked perfectly in Portugal and I expect it will continue to grow and get even better.”

With the knowledge gained from previous years, Paddon is feeling as prepared as he can be for his fourth event on the Italian Mediterranean island of Sardinia.

“We tested for Sardegna prior to Portugal, so we will take similar settings forward and refine for the conditions.

“Each year the configuration of the stages changes a little, and this year some sections from 2014 are reintroduced. However, generally the nature and challenges of the stages are the same in that it’s the hottest and roughest event in Europe. This rally is certainly a challenge for both car and drivers. It’s a rally that rewards clean, smart driving and not necessarily all-out speed. We have a plan in place that we look to deliver and if we can do that, a result should naturally come to us.”

Paddon is currently eighth on the WRC drivers’ championship points-table, which means he starts Friday’s 125.46 competitive kilometres in eighth position on the road.

“We will have a small road position advantage on Friday. It’s key to have a clean even if more unspectacular Friday. Too often this year we have had problems on the first day which puts you on the back foot for the rest of the rally when they re-seed the field into reverse rally classification.”

Marshall contests Rally Italia Sardegna for the third time, having previously rallied there in 2010 and 2016. I have good memories of my first WRC stage win and the second place achieved on the power stage with Kevin Abbring last year.”

Marshall adds: “There are always early starts and late finishes with long road sections from the service park to the stages, so you have to manage energy levels in Sardinia well. Combined with usually hot and dry weather on rough, rocky stages, it’s a very demanding event from a physical perspective, with the technical, twisty nature of the roads meaning there’s always plenty of notes for me to fire out.”

Paddon and Marshall will be in the #4 Hyundai i20 coupe world rally car, while Hyundai Motorsport team-mates Thierry Neuville and Nicolas Gilsoul, and Dani Sordo and Mark Marti are in the #5 and #6 Hyundais respectively.