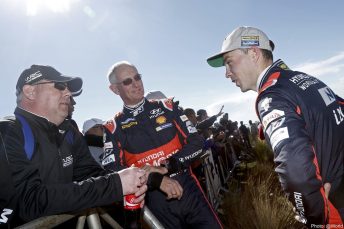 Paddon and Kennard have forged a strong partnership that started in 2006 when Paddon was just 18 and competing in his first New Zealand national rally championship season.

“It’s been an incredible journey with John over the last 11 years and it’s amazing to hit the century,” says the 29-year-old of his sporting journey with Kennard. “Who would have thought after John first got in the car with me when I was 18 to ‘just see how it goes’ that it has taken the path it has?”

Blenheim-based Kennard, who continues to write his own section of the record books as the oldest co-driver in the WRC at the age of 57, says: “When we started this project with Hayden, we all only had dreams about how far we could take it, but, in the end, hard work and determination from so many people, plus sometimes Hayden’s sheer bloody-mindedness to succeed, have brought it close to fruition and, for me it’s just fantastic to still be here contesting our 100th rally together.”

The New Zealanders compete in Rally de España, taking place this year 13-15 October, for the fourth time. For Paddon, this make the Spanish rally with its combination of gravel one day and tarmac for two days significant.

“It’s a special event as this is where we debuted in a WRC car three years ago. It’s also the rally on which we won our first stage in WRC [in 2014] so John and I have many good memories here,” says Paddon.

Based in the holiday resort town of Salou, south of Barcelona, the rally includes Friday’s predominantly gravel stages, followed by all-asphalt stages for Saturday and Sunday.

Paddon says: “I really enjoy that it’s the only mixed surface event on the calendar. Naturally I enjoy the day one gravel stages, but the tarmac stages here are some of the nicest in the world. They’re as close as you get to circuit racing in rallying.

“It’s good that the rally starts with gravel. Hopefully this will allow us to build some momentum and go into the weekend’s tarmac stages with good confidence. We had a really good test on gravel last week so hopefully we can make the most of that.”

Kennard adds to Paddon’s comments regarding Rally de España: “It’s always great to be in Spain. The rally presents a unique challenge with our pace notes, as the difference from the narrow, dusty gravel stages, to the wider, smooth tarmac requires a change in the way the notes are read, much in the same way we change the setup of the car and Hayden changes his driving style.”

Fresh from a sixth place in the Tour de Corse and an invitational tarmac rally in Italy immediately prior to the Spanish WRC round, Paddon says: “It has been a little frustrating of recent, not being as competitive as I would like.

“Road position will play a part on day one [when Paddon and Kennard will be fourth on the road courtesy of their fourth place on their respective WRC championship leader-boards], but I hope we can be competing up the front to start with. Come day two and three on the tarmac, the goal is to be closer to our team-mates than we were in Corsica.”

Paddon joined Hyundai Motorsport for a pre-event test on tarmac in Spain at the end of August as well as having an additional test on gravel during this past week.

The Kiwis will contest the Spanish event in the #20 car for the Hyundai Mobis World Rally Team, while team-mates Thierry Neuville and Dani Sordo are in the #3 and #4 Hyundai Shell World Rally Team New Generation i20 WRC cars respectively and Kevin Abbring pilots the #10 car.