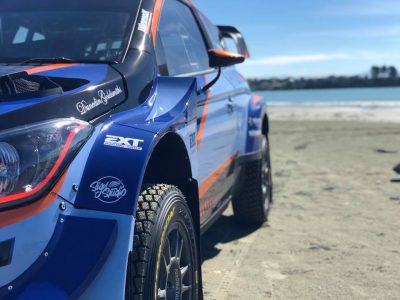 Now in his ninth year of international competition, Kiwi rally star Hayden Paddon has never lost the connection to home with his key sponsors all being New Zealand companies.

Retail chains Pak’nSave and Z Energy have backed Paddon for seven years, right from his early days in the entry levels of the FIA World Rally Championship. Since Paddon’s signing to Hyundai Motorsport in 2014 – making him the first New Zealander to secure a professional WRC contract – he’s also worked closely with Hyundai New Zealand, becoming a brand ambassador for the New Zealand-owned company which developed a unique supporters’ club, Paddon’s Pack.

All three companies play a key role in Paddon’s two-pronged season of domestic and international competition in 2018.

Paddon says: “As a team, Paddon Rallysport, and for me personally, we are humbled to be partnered with some of New Zealand’s biggest and most trusted brands. We are all working to common goals so it’s important to be working with organisations that are striving for excellence as we are. It’s also important for me to be associated with 100% Kiwi-owned companies. I’m a Kiwi through and through so keeping it local is very much part of who I am.

“Z Energy and Pak’nSave are two of our longest standing partners, both of which we have been with for seven years. Without the support of our good friends at Pak’nSave, I would have never have had the opportunities at the start of my WRC career that I did, and I will forever be grateful for this. To have them and the unconditional support of Z Energy through thick and thin is a real boost and I look forward to increased involvement and activities with them over the coming years.

With the Paddon Rallysport-run Hyundai i20 AP4+ rally car entered in five of this year’s six New Zealand Rally Championship rounds, Hyundai New Zealand is showing their support by hosting exclusive customer and supporter events at each of the five rallies – Otago, Whangarei, Timaru, Coromandel and Tauranga.

In 2016, the company launched an interactive online community for Paddon supporters, called ‘Paddon’s Pack’ (see www.paddonspack.co.nz) and tens of thousands of Kiwis have since joined the supporters’ club. Hyundai customers and Paddon’s Pack members have the opportunity to meet and hear from Paddon at these events. Paddon also gets together with Hyundai New Zealand to run customer-only ride days in the i20 rally car throughout the year.

Over the past couple of years, Paddon has also been working on ways that he can support the New Zealand rally scene. One is being able to draw on the connections he’s made during his WRC schedule to world-class suppliers of rally car componentry, such as Winmax Brakes, EXT Suspension and Evo Corse Wheels.

“We have been working with Winmax brakes for some time, but to now also be an official ambassador of a product that I proudly put my name to is an honour,” says Paddon. “They are one of the most proactive companies I have worked with, to the point if we want a new brake pad designed, we will have it on our doorstep in a matter of days.

“Further to this we have built some relationships with EXT Suspension and Evo Corse Wheels to provide high quality products to the New Zealand market via Paddon RallySport. Rather than focusing on profit margins, we have focused on providing these parts at the lowest possible price to make them more achievable for New Zealand competitors. I know what it’s like trying to fund your rallying campaigns from a wage, so we’re trying to do our bit to make it a little easier for local competitors to access world-class products.”

With the first New Zealand event of the season, Rally Otago, taking place on 14 and 15 April, Paddon is currently touring New Zealand with the Hyundai i20 AP4+ rally car and the new-look Hyundai New Zealand Rally Team truck at a series of Hyundai dealership events. Paddon remains in New Zealand to contest the International Rally of Whangarei, before returning to Europe and his WRC commitments at Rally Portugal in the middle of May.