Paddon to draw on experience with Australian Rally

Paddon to draw on experience with Australian Rally 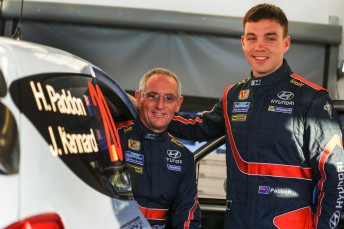 Hayden Paddon and co-driver John Kennard will be drawing on their experience competing on the high-speed country roads and tight, technical forest tracks typical of Rally Australia when they head to this year’s Australian World Rally Championship event.

The Kiwis will compete in a Hyundai i20 WRC car for the fourth time and join Hyundai Motorsport regulars Belgians Thierry Neuville and Nicolas Gilsoul, and Australian driver Chris Atkinson with Belgian co-drover Stéphane Prevot on their second event with the team this year.

“We’re really looking forward to rallying with Chris and Stéphane in the Coates Hire Rally Australia – it’s going to be good to compete against him. There will be lots of Australian and New Zealand rally supporters out there so to have two drivers from this part of the world competing at the top level of rallying in WRC Hyundais is going to be great for spectators,” says Paddon who has nearly 100 people joining an official tour to the event with his management company, Hayden Paddon RallySport Global Ltd.

Paddon’s goals are to continue the progression he and Kennard have made in their first three events with the team.

“We’re always looking to build on the experience we’ve gained so far and build on the improvements in performance we’ve been showing from rally to rally. If we can take a step up from what we did at Rally Finland, that would be good. Also if we could get a top five finish, that would be really good, but I realise the size of the challenge to do that. We have to make sure we have a really good rally to achieve this.”

Paddon adds: “One key will be to try and take advantage of our road position on the first day. Seeing as that’s based on championship order, we’ll be a little bit further back. So that road clearing from the guys in front is something we should be able to make the most of.”

The starting order for day one of the three-day rally sees drivers run in championship order, i.e. Volkswagen’s Sebastian Ogier first, team-mate Jari-Matti Latvala second and Hyundai’s Neuville will be fifth on the road. With only 11 WRC cars entered, Paddon – currently 17th on the 2014 FIA WRC drivers’ standings – will start 10th and Atkinson in 11th.

The Kiwi ace is understandably upbeat about his progress during his debut WRC season.

“I definitely feel like we’re learning a lot this year with the team and the team’s helping me develop on many levels as a driver, so that’s great.

“I know where we can be going faster, but it’s not something that you can do within a blink of an eye. It takes a little time to adapt and tune your mind into the fact you have to brake a little bit later and carry that little bit more extra corner speed to what I’ve been used to for many years. It’s getting close, but it takes a little more time.

“For this event, we’re feeling quietly confident. We had a really good test with the Hyundai i20 WRC in France and have changed a few things in the setup to move the car more toward to my style of driving, rather than in the past we’ve been taking what Thierry and Juho have been doing with their setup and trying to adapt my driving to that.

“Now we’re looking at setup from the other way round. Combined with some good pace notes from previous events here, I think we have the best chance all year of a good result.”

Paddon adds: “It’s the first time in Australia for the team and there will be some unknowns, but with both Chris and I, both being Australasian, there’s some good experience that we can certainly help with. But the team’s obviously on a high after winning in Germany so everyone’s extremely motivated and will be competitive.”

Coates Hire Rally Australia is based in Coffs Harbour for the third year and its 948.10 km route uses most of the stages from 2013, with some minor tweaks.

It retains its compact route with all of the 20 stages within a radius of 55km of the rally base. New for this year is a larger service park and a new mixed asphalt and gravel super special stage that will be run in darkness on Friday and Saturday evenings.

Paddon and Kennard join competitors for reconnaissance of the 20 special stages on Tuesday and Wednesday before Thursday’s official shakedown runs, rally show and ceremonial start.

Friday’s action is based south of Coffs with the six country stages varying from high-speed shire roads to tight and technical forest tracks.

A loop of three tests is tackled in the morning and repeated in the afternoon before two runs of the super special in the evening.

On Saturday crews head further south to a selection of hard-based shire roads west of Nambucca Heads, including the monster Nambucca stage which, at 48.92 km, is one of the longest of the season. On Sunday the action moves north of Coffs to three stages run morning and afternoon to complete the event.