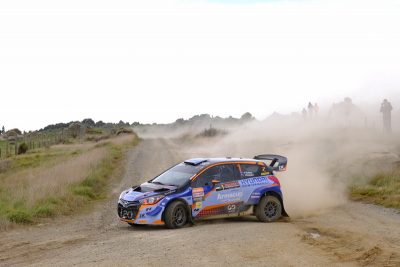 Kiwi WRC driver Hayden Paddon is excited to return the rallying roads of his teenage years for this weekend’s Rally of South Canterbury in his Hyundai i20 AP4+ car. Originally from the South Canterbury town of Geraldine, Paddon will be re-joined by John Kennard in the co-driver’s seat for his ‘home rally’ running Saturday 23 June as the fourth round of the 2018 Brian Green Property Group New Zealand Rally Championship.

Paddon and Kennard last contested the South Canterbury event ten years ago in their Evo8, the one and only time they won this event when it was part of the South Island series. They also contested it in 2006, earlier in their working partnership.

With Paddon fitting in several NZRC rounds with the Hyundai New Zealand Rally Team in between his international WRC duties with Hyundai Motorsport, it was particularly significant for the 31-year-old when the South Canterbury Rally was announced as being part of this year’s New Zealand championship. South Canterbury has been an NZRC round only twice before with the last time being September 1984*.

“This event has a really special meaning to me and it’s great that it’s a NZRC round for the first time in many years,” Paddon says. “On these very roads is where I first learnt to drive, where I did my first gravel hillclimb in my Mini and where I first had a class win in the 1600cc class many moons ago. It’s also home turf for so many people that have helped me from day one; it means a lot to compete in front of them, so John and I just want to really enjoy the stages.

“It’s been 10 years since I’ve driven these stages, but I remember them as being some of the nicest stages in the country. Quite fast, flowing countryside stages with plenty of crests and some tricky parts.”

With around 190 competitive stages, the rally uses roads to the north-west and south-west of Timaru. It features 11 different stage with no repeats, unlike many NZRC or WRC events.

“It will be a great day out,” Paddon says. “Many different stages and 190 km to write pace notes for, and it certainly keeps things more interesting with no repeat stages. The rally has attracted over 96 entries and we’re looking forward to an incredible day’s rallying.”

Blenheim-based Kennard is also enthusiastic about the stages ahead on Saturday. “We’ll write all our notes completely from scratch. Luckily, with 190km to write, this isn’t a hard job, as the fantastically smooth New Zealand public roads mean there’s very little work needed to tidy them up after recce on Friday.”

Kennard adds: “I’ve also done this event a lot earlier, when it was still the South Canterbury Car Club spring rally, in 1979/1980, but back then I was driving my own car and didn’t quite achieve the same result as we did in 2008!”

Both Paddon and Kennard have had some physical challenges of late, Paddon with the high impact crash in Portugal in May, and Kennard with a hip operation a few weeks earlier.

Paddon reports: “All is continuing to improve each day. Luckily the smooth roads in New Zealand will not present any challenges in this regard.”

Kennard is also in good shape. “My hip is fantastic. The only pain I’ve had since the op eight weeks ago was when I headed back to the gym after so long away, but that was nothing to do with the hip, just the lack of using the muscles around it and elsewhere!”

The Paddon Rallysport-prepared Hyundai i20 will also be in prime condition for the high speed challenges ahead, having received a quick refresh and rebuild of key componentry since its last event in Whangarei.

Seeded first on the road, Paddon and Kennard are scheduled to start the first special stage, Lyalldale Road, at 7.45am on Saturday, and wrap up the day’s action around 3.15pm with a few laps around the tarmac of Levels Raceway – which should be fun on gravel-spec tyres well-worn from the previous four gravel stages.