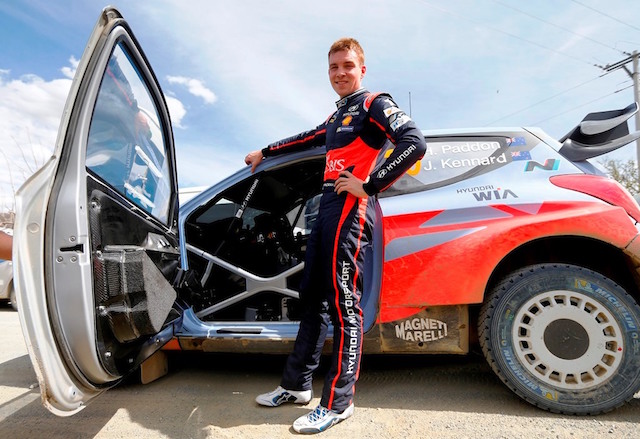 Fresh from a career-best equalling second place at Rally Sweden in their New Generation i20 World Rally Car (WRC), Paddon and Kennard are looking forward to the gravel surface of Rally Mexico (3-6 March) and to furthering their knowledge of this tough, hot rally.

“It’s really good being back on gravel; even in our recent test it felt much more comfortable,” Paddon says.

“However, Mexico and Argentina (WRC round four) are two events that don’t suit us as well as the following gravel rallies back in Europe, so our target is to improve and adapt to these unique challenges of the heat and harsh gravel terrain.

“We will focus on continuing to learn more about the Mexican stages – it’s an event we don’t have a lot of experience of, having competed here only once before and missing much of the first day last year.”

In 2015, a small error on Friday’s second stage resulted in broken suspension, meaning Paddon and Kennard retired for the day and restarted on Saturday, eventually finishing 17th.

Paddon heads to Mexico fourth equal with Hyundai Motorsport team-mate Dani Sordo in the WRC drivers’ championship. With the running order for Friday and Saturday decided by championship position, due to their overall higher finishes in the previous two events, Paddon will start ahead of Sordo.

“This is good for the team as we are not scoring manufacturer points on this event,” Paddon says.

“It means we can help sweep the road a little for Dani. We found here last year when we were first on the road, having re-started on Saturday, that the further up you are, it’s very slippery.

“So fourth on the road is not ideal for us. However, Sébastien Ogier will still be the benchmark and he is running first on the road – that’s just how it works with the running order.”

The challenges in Mexico include ambient temperatures pushing 30°C – a far cry from recent colder conditions in Monte-Carlo and Sweden – which places huge stress on cars and crews.

The unforgiving gravel roads become heavily rutted by the second pass. Altitude is an extra test with the mountains around Guanajuato reaching 2,737 metres elevation above sea level. The thin air places further stress on engines, meaning cars can lose up to 20% power.

The 2016 edition of Rally Mexico includes the gigantic 80km Guanajuato stage on Sunday morning, the longest WRC stage since 1983, plus nine short super special and street stages – something that Paddon admits aren’t his favourite.

Paddon comments: “Nowadays all drivers should be fit enough for the challenge of Sunday’s massive 80km stage, so the approach stays the same. The biggest factor for a stage like this will be looking after tyres as this is a big unknown for everyone.

“Having so many super special stages in this rally gives us an opportunity to improve and find the techniques to go faster in these short sprints. It’s also an area we will spend time on throughout the year between events.”

Paddon says he has a new mental approach this year thanks to the work he has being doing with coach Gilbert Enoka.

“It’s important to stay focused on the step-by-step goals. Of course we want to fight at the front and will do this as often as we can – that’s the target every time we get in the car.

“But to be in a position to fight for the championship in the future, we have to put all the building blocks and information together now.

“Overall, we will use Mexico and Argentina to continue to fine-tune the new car, so that once we get back to Europe we can hit the ground running on events that we enjoy and suit us.”

Based in the country’s fifth largest city of León, 400km north-west of Mexico City, the rally starts on Thursday night with the exciting Guanajuato ceremonial start that sees huge crowds and festivities at the UNESCO World Heritage Site as drivers tackle the city’s former mining tunnels.

The team aims to make it three podiums in a row for the New Generation i20 WRC, having claimed multiple stage wins and consecutive podiums in the opening two rallies of the season.