Paddon aims for momentum in Argentina

Paddon aims for momentum in Argentina 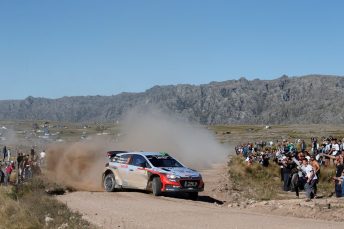 Kiwi rally star Hayden Paddon acknowledges he hasn’t had the best start to the year, but he and co-driver John Kennard are looking for some improving momentum as they return to Argentina, the scene of their history-making first World Rally Championship victory last year.

“It is one of the roughest events on the calendar, and depending on the weather/conditions, this will influence the rally a lot,” says Paddon of the 27-30 April running of Rally Argentina.

“Looking after the car is also key and while it would be nice to get the taste of champagne again, we head into this rally after some thorough preparation to push hard. We know we can be competitive, but the competition is much closer this year, so, as always, we will be giving it a good go. The focus is never on others’ expectations: it’s about getting some momentum and confidence back, and if we can do that, the results will flow.”

Paddon heads to the all-gravel South American event with his Hyundai i20 Coupe world rally car following a successful two-day test on gravel prior to the previous tarmac WRC event in Corsica where he finished sixth. “We confirmed our gravel settings for the car and made some improvements to better suit my style. It was a good test.”

Paddon and Kennard have both been back in New Zealand since Corsica, taking the long way around from Europe to Argentina.

Paddon celebrated his 30th birthday with family in Wanaka, but didn’t stint on his training. “It’s always good to return home, even if only for a week this time. We have been pushing hard with prep for Argentina, both physically and mentally.”

“The route has much the same stages as last year, so this gives us confidence as they are stages we enjoy and have good information from,” Paddon says. “After last year’s result, naturally it’s nice to go back to this event and that success gives us more confidence, particularly on the gravel surface with which I’m most familiar.”

“I’m just happy to be back on gravel, after a very tough rally in Corsica, and to be heading into a series of five events that we really like,” says Kennard, who announced a month ago that he’ll step down from his WRC role after July’s Rally Finland. “Argentina is always a great place to rally, with a mix of faster, slower, rougher and less rough stages, and of course, as the scene of our first WRC victory last year, as well as in the production category win in 2011, is certainly a special place to return to for one of my last WRC events with Hayden.”

Paddon and Kennard will start the first day eighth on the road in the #4 Hyundai i20 Coupe WRC, based on their current championship position. Saturday and Sunday will see WRC competitors running in reverse rally classification.