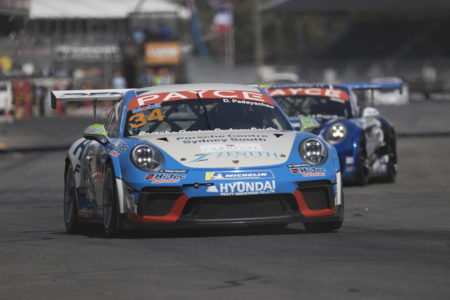 While the start to 2020 Porsche PAYCE Carrera Cup season is yet to get underway due to the Coronavirus restrictions, Sydney-based Mobil Pro driver, Duvashen Padayachee, and his father, Indiran, took the opportunity to compete NSW Production Sports Car Championship races at Sydney Motorsport Park this weekend.

The results saw both Garth Walden Racing-prepared Porsche 911 GT3 Cup cars in the top-five against current-specification GT3 race cars, with Duvashen taking outright victory in both races and Indiran finishing in sixth and fourth respectively for the two races.

Duvashen Padayachee returned to Porsche PAYCE Carrera Cup Australia in 2019 after a short break from the championship, becoming teammate to his Pro-Am ranked father Indiran at the Sydney based GWR Australia team.

While the duo had never faced one another in Porsche PAYCE Carrera Cup competition before 2019, they did become the first father-son combination to race any international Porsche PAYCE Carrera Cup round in the same entry during the 2015 two-driver Pro-Am event at Phillip Island. Since then the Padayachees have become consistent competitors in the national championship.

Porsche Cars Australia permitted owners of Porsche PAYCE Carrera Cup cars to race in other series while the start of the national series was delayed, providing a boost to its teams and drivers as well as state-level categories like NSW Production Sports Car Championship.

After the event Duvashen said, “We learned a lot this weekend – we were able to do some race runs in the Carrera Cup car and we were able to see how the tyres worked in different scenarios.”

“We knew it was going to be a challenge competing for outright wins up against some high-quality GT3-spec cars this weekend, but our performance just shows the quality of Porsches and we were pleased to showcase the potential of the current generation Cup cars.”

Father Indiran said, “It would have been nice to have followed Duvashen across the line for a 1-2 finish, but I’ve had a lot of fun this weekend.”

“The Production Sports Car field is very competitive and I was always in a battle with other cars.”