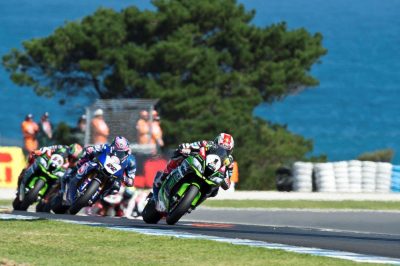 …including more sessions for the stars of the World Superbike show

Fifteen international and national races and an extra session for the world superbike boys are locked in and confirmed, with the release today of the schedule for February 23-25’s season opening round of the 2018 MOTUL FIM Superbike World Championship at the thrilling Phillip Island.

The two 22-lap WorldSBK races at the Yamaha Finance round will be run at 3:00pm on Saturday and Sunday, but the biggest bonanza for spectators will come on Friday with a third practice session added into the equation for the world’s leading production bike series.

That’s music to the ears of the three Aussie wildcards in the WorldSBK category – Yamaha pair Wayne Maxwell and Daniel Falzon and Honda’s Troy Herfoss – who will appreciate the extra track time as they look to fine-tune their machines and keep the WorldSBK top brass within striking distance.

Meanwhile, the 18-lap WorldSSP race will start at 1:30pm on Sunday, with even more Aussies to cheer on: championship regulars Anthony West and Lachlan Epis, as well as local wildcard Tom Toparis. All three will be Kawasaki mounted.

As well as the world title action, 12 national support races will be held at Philip Island across four classes: Superbike, Supersport, Supersport 300 and the YMF R3 Cup. And the pressure will be on, as it’s the start of the 2018 Australian championship.

Huge fields are particularly the name of the game in Superbike and Supersport 300. In Superbike, all the talk is about the return to racing of three-time WorldSBK champion Troy Bayliss, who’s coming out of retirement to compete in his national championship for the first time since 1997.

The prospect of the 48-year-old racing at the front on his Ducati in the 12-lap races is tantalising, but reputations will count for little in a field bursting with talent – including six national Superbike champions in Josh Waters (Suzuki), Maxwell (Yamaha), Herfoss (Honda), Bryan Staring (Kawasaki) and Glenn Allerton (BMW).

A three-day pass for world superbikes at the island is just $120*. Add camping at the circuit campground for up to four nights, and you’ve the perfect location for a summer long weekend away with your mates or family.

Feel like spoiling yourself? Opt for a Bar SBK pass at $260* and gain access to three undercover facilities, or go for a VIP option in the fully catered suites above pit lane.

And as always with World Superbikes kids 15 and under are FREE^, as is your bike.

Nothing beats World Superbikes…LIVE at the Island. Book your spot for the 2018 World Superbike season opener, this February 23-25 at Phillip Island, at Ticketek.

For further information www.worldsbk.com.au or the Superbike Hotline 1300 728 007

*All ticket prices quoted purchased in advance and subject to Ticketek processing fee. Book now and save on gate prices.