After testing the water in 410 Sprintcars throughout last season around his Wingless Sprint commitments, Zac Pacchiarotta is now busy preparing himself for a full assault on the 410 Sprintcar 2020-21 season. 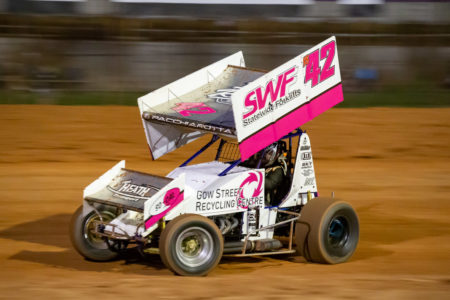 Coming off his best season in Wingless Sprints, which saw him finish fourth in the NSW Club Championship point standings, a minor podium finish at Valvoline Raceway and maiden feature race win which took place at Canberra’s ACT Speedway, this youngster is gearing himself up to focus on 410 Sprintcars.

“I’m planning to do as much racing as possible in the 410 Sprintcars, especially with it being the final ever season at Valvoline Raceway,” commented Pacchiarotta.

“I’ve really enjoyed my four seasons in Wingless Sprints, but I’m now really looking forward to my first full season in 410 Sprintcars and being able to live out a childhood dream of my mine.”

In terms of plans for his first season in 410 Sprintcars, Pacchiarotta has set himself realistic expectations.

“The goal for my first season in Sprintcars is to try and get as many laps as possible and learn as much as possible along the way,” he said.

“With the more laps you get, the more confidence you gain and hopefully I can work my way towards running consistently, and anything after that is going to be a bonus.”

Last season saw Pacchiarotta run the full season in Wingless Sprints, but also debut in 410 Sprintcar at Valvoline Raceway and go on to run a total of three race meetings.

“I didn’t get to do a lot of racing in the Sprintcar racing last season but it was enough to get me hooked on them,” expressed Pacchiarotta, who will campaign the NS # 42 Statewide Forklifts & Access Rentals supported Kistler powered Maxim car.

“Although it was a bit nerve racking in the beginning, it was really exciting to get behind the wheel of a Sprintcar and I can’t wait for the new season to begin.”

Apart from his 410 Sprintcar campaign, Pacchiarotta plans for next season are to do many of the major race meetings as possible in the Wingless Sprints, and he has set himself one main goal.

“I’ve come pretty close a few times, but I’d love to get a feature-race win at Valvoline Raceway before they close it (the track) down,” added Pacchiarotta.

To find out more about Pacchiarotta and the SWF Racing team, LIKE them on Facebook by searching SWF Racing.

March 27
Valvoline Raceway
King of the Clay (USC Round 18)

May 1
Valvoline Raceway
USC Round 20

May 15
Valvoline Raceway
USC Round 21