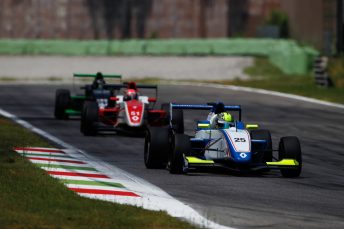 Pankiewicz and team-mate Presley Martono, who both race for the Lincolnshire squad in the blue riband Formula Renault Eurocup, contested the weekend’s opening two rounds of the sister NEC category at Monza and produced excellent pace.

After posting her highlight top seven finish in round one on Saturday, Pankiewicz went on to add 10th position in round two on Sunday to cap a very successful event and boost confidence hugely ahead of the next Eurocup race meeting this coming weekend, 1st/2nd July, in Hungary.

Having promised much, Martono’s weekend at Monza unfortunately went awry in spectacular fashion in both encounters. Crashing out of sixth place at the Parabolica on lap two of race one, the Indonesian was then involved in a high-speed tangle on the first lap of race two which resulted in the Mark Burdett Motorsport driver making heavy contact with the barriers on the back straight.

“We’re very happy for Julia to take her best finish yet, seventh was a fantastic result and she raced well all weekend”, said team principal Mark Burdett, “The experience gained from racing in the NEC at Monza can only benefit her in Eurocup, so hopefully Julia can carry this momentum forward to next weekend.

“Everyone at the team is so disappointed for Presley that he wasn’t able to convert his true pace into some deserved results. He had fantastic pace and, in race one especially, he really looked capable of running in the lead pack. It’s such a shame about the incidents, but we know the speed is there.”

During the opening qualifying session, setting the grid for round two, Martono impressed with the ninth fastest time, which was little more than 0.3 seconds shy of the top three, with Pankiewicz 14th quickest a further 0.7 seconds adrift of her team-mate. In the round one session, Martono was 10th fastest with Pankiewicz again 14th on the timesheets.

At the start of Saturday’s contest, Martono climbed into eighth through the Rettifilo Chicane and when two cars ahead collided he smartly avoided the drama and ultimately moved up into the coveted top six. Holding station and running close behind the lead quintet, Martono’s involvement then came to a sudden end at the Parabolica on lap two when he crashed out.

Pankiewicz made good progress on lap one, moving up into 11th position, and that then became 10th at the end of lap two as a result of Martono’s misfortune. Soon climbing into ninth position when a rival’s car flipped over at the Variante Della Roggia, following the ensuing Safety Car period racing resumed with 11 minutes left on the clock.

Maintaining ninth position and lapping competitively, Pankiewicz then moved up into the top eight with a great pass at the chicane late-on and then took seventh place before the conclusion to wrap-up a tremendous performance.

In round two, Martono lost a couple of positions at the Rettifilo Chicane to slip to 11th but a determined fightback only lasted to the final sector of the lap when contact with Bartlomiej Mirecki resulted in the Mark Burdett Motorsport car spearing off into the barriers on the right-hand side of the straight. Fortunately, Martono emerged unscathed from the extremely heavy impact.

Following a Safety Car period, racing resumed with 17 minutes to go and Pankiewicz held 11th place, having started in 14th spot. Another cautionary period was triggered almost straight away, due to a car stranded on the kerbs at the Roggia chicane, and Pankiewicz climbed into 10th where she stayed to the flag on lap 12.

Martono and Pankiewicz return to Formula Renault Eurocup action just a few days from now when the Hungaroring, near Budapest in Hungary, hosts the fifth event of the season over the weekend 1st/2nd July.