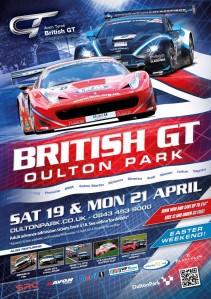 Causing the headlines are the depth and breadth of the entry with Aston Martin fielding nine cars, Ginetta seven, BMW and Ferrari four, Porsche three, Bentley and Nissan a brace each and Audi, Lotus and McLaren bringing a car apiece, these 34 premium racing machines split across the two classes, GT3 and GT4.

An impressive roster of drivers drawn from the ranks of amateurs and professionals highlights the unique nature of the championship which continues to attract competitors from around the world as well as from home-grown talent.

Probably the best known competitor is known for his exploits on two wheels rather than four, with eleven-time world and six-time Olympic cycling champion Sir Chris Hoy making his debut as part of his quest to race at Le Mans. Hoy will race for the Nissan GT Academy Team RJN in a Nissan GT-R GT3 with experienced ‘peddler’ Alex Buncombe sharing driving duties.

Hoy will face a tough challenge as any competitor will admit. Oulton is an undulating challenge of a circuit, with blind crests and closely-placed barriers to punish mistakes, whilst a scarcity of overtaking opportunities makes for exciting racing as rivals dice across the 2.7 miles of the International circuit.

The Beechdean Aston will face tough opposition in its quest for glory. From the Aston ranks, Motorbase field two GT3 cars with the new Oman Racing Team moniker with the line-up of Ahmad Al Harthy / Michael Caine and John Hartshorne / Rory Butcher, whilst four-in-a-row team champions Trackspeed have the tasty combinations of Jody Firth and Warren Hughes in their #12 Porsche and Wrexham’s Jon Minshaw and Phil Keen in the #33.

Triple Eight field their BMW Z4s, with the tantalising pairings of Lee Mowle and Joe Osborne / Derek Johnston and Luke Hines, whilst and Ecurie Ecosse have Marco Attard and Alexander Sims in their Z4.

Elsewhere, notable entries include British Touring Car Championship fan favourite Tom Onslow-Cole, who makes the jump to GT racing for this season and secured a late place on the grid for the locally-based Strata 21 Nissan GT-R he shares with Paul White.

British marque Ginetta continues to be a bedrock of the entry, with seven cars represented with one GT3 entrant from IDL CWS and a half dozen entries in GT4, including the championship’s only female competitor, Tania Mann in the #41 Optimum car. Returning GT4 champion Rick Parfitt Jnr has a new team and new team-mate as he seeks to retain his crown.

No GT racing series would be complete without the iconic Ferrari brand present, and 2014 sees no less than four 458 Italias in GT3. Rosso Verde field Hector Lester and Benny Simonsen, brother of the sadly departed Allan, in the #3 whilst AF Corse place John Dillon and Aaron Scott in the #13 car and Thai-Greek driver Pasin Lathouras and experienced GT pilot Richard Lyons in the #29. FF Corse field Gary Eastwood and Rob Barff.

Local interest is best represented in the GT4 category with Runcorn-based ABG Motorsport running the #45 BMW M3 for Chorley’s Peter Belshaw and Liverpool’s Declan Jones, who finished second in GT4 in 2013.

Stephane Ratel, Founder and CEO of SRO Motorsports Group
“It speaks volumes of the rise to prominence of British GT that the 2014 season will see a full entry list with 22 GT3 cars and 12 GT4 cars set to race this weekend. To have such a great grid for Oulton Park shows real quality and diversity with fantastic combinations of talented drivers. I know there will be a superb race weekend in store.”

British GT Championship Series Manager Benjamin Franassovici
“The Avon Tyres British GT Championship is truly continuing with its upward trajectory and we will celebrate our 21st birthday with a rich and intriguing line-up to tantalise race fans at the track and at home. There is so much scope for exciting racing with such a superb mix of cars and drivers. Oulton Park is such a wonderful venue to get everything underway. I am convinced that this season is going to be a really special one in our history.”