Oscar Piastri set for Europe in 2016

Oscar Piastri set for Europe in 2016

MEDIA RELEASE: Leading Australian junior kart racer Oscar Piastri will follow in the footsteps of James Courtney and Ryan Briscoe to base himself full-time in Europe throughout 2016.

The 14 year-old will join with the back-to-back World Junior Championship winning Ricky Flynn Motorsport for a 15-event schedule throughout the year.

“This is a fantastic opportunity for me to take my driving to the next level. Ricky Flynn Motorsport is one of those teams that you see in the European paddock and you just know they mean business and then you race alongside their drivers on the track and you see the results,” said Piastri.

“It will be amazing to actually be one of their drivers next year. I’m also really happy to be driving the FA Kart chassis, the kart I’ve had so much success in Australia with my mentor James Sera and the JSKC team. 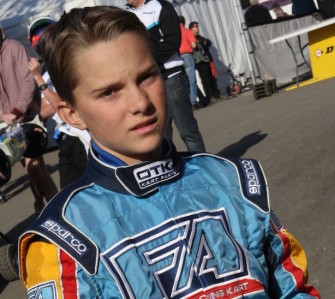 “It’s going to be a very busy year, 15 international races and a big testing schedule means I need to move to Europe. It’s exciting but also a huge commitment for my family and school and I cannot thank them enough for their support.”

Courtney and Briscoe, both spent much of their teenage years based in Europe competing against the world’s top drivers in the sport throughout the late nineties, have previously indicated the experienced they gained during their European expeditions has been valuable throughout their careers.

Piastri sprung into the spotlight earlier this year with a hard charging drive from the back of the 34-kart field to record a top ten finish in the European Championship.

He also won the Race of Stars and finished third in the Australian Kart Championship.