Osborne Motorsport pulling out all stops to be ready for Winton

Osborne Motorsport pulling out all stops to be ready for Winton 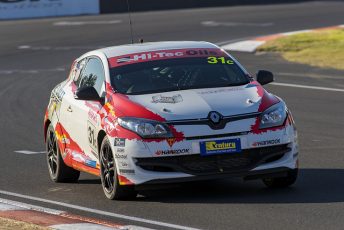 Round two of the 2017 APC this weekend (June 9-11) will come after a hectic period of rebuilding for long-time entrants Osborne Motorsport, with damage incurred at the Hi-Tec Oils Bathurst 6 Hour – which doubled as round one of the APC – keeping the team on their toes in the lead-up.

The #31 Osborne Motorsport Renault Megane entry appeared to endure only a minor brush to the wall with Bob Hughes at the wheel during the event, but once the car came back to the garage the level of damage was found to be much higher than it first seemed.

So high were the repair requirements, that the team only received the car back from the repairers mid-last week.

“The car was all bent underneath so it required very extensive repairs even though when you watched the contact it seemed so minor,” Osborne Motorsport Team Principal, Colin Osborne, explained.

“The rear part of the shell was structurally out of alignment, and the rear axle assembly was bent and required replacement.

“All of this is compounded by the fact that you have to remove a lot of systems to affect the repairs, so when the car got back mid-last week there was a lot of work to do to reinstall all those systems and then get to preparing the car ready for racing at Winton this week – all in a matter of days really.

“Even so, we are confident heading to Winton – we know the car is fit for the job, and we will be constantly checking it over the course of the Winton weekend to make sure nothing has been overlooked.”

For Winton’s round two of the 2017 APC season, the #31 will be steered once again by young gun and Formula 4 race winner Tyler Everingham. While Bob Hughes joined him at Bathurst, Winton will see APC debutant Michael Almond join Tyler in the driving duties. In the #13, Osborne will once again be joined by Hadrian Morrall at the wheel.

“Michael is certainly new to the team and to the APC. He is a Carrera Cup regular and has been progressively improving in that category over the years – I think he will bring quite a bit of experience to the team,” Osborne explained.

“As far as Tyler goes – I think he did an absolutely sensational job at Bathurst. He clearly has a lot of talent. What is so impressive about him is that he takes a very mature approach to his motor racing, and the guys in our team were also really impressed at the way he is able to listen carefully to everything he is told and then go out on the track and do exactly what he was told, and the results followed. At the end of the day, I think his time with us is going to be just a stepping stone on the way to something much, much bigger – I really think he has a big future in Australian motorsport.”

While Osborne is quick to sing the praises of all his Bathurst drivers including Tyler, that doesn’t mean the team was overly happy with how the event turned out so be sure to watch for a team out for redemption at Winton this weekend.

“Overall, the results for our team at Bathurst was really pretty disappointing unfortunately. We went there with high hopes and I think that we showed in qualifying that we were probably going to be very competitive,” Osbone said.

“Unfortunately the #13 car was plagued by an engine misfire all day and it was quite demoralising really.

“That was then compounded by the damage to car #31 to see us go home with a pretty ordinary result.

“At the same time however, there are plenty of positives to take away. The pace the #13 had, the job that Tyler did and Bob Hughes too – all the drivers performed very well. While there was disappointment leaving the track, we are still fairly optimistic about getting into the rest of the season, and that starts with Winton this weekend!”

Winton Motor Raceway will host two 300km races as part of round two of the 2017 Australian Production Cars across June 9-11.