Oracle 86 steps up at QR

Oracle 86 steps up at QR 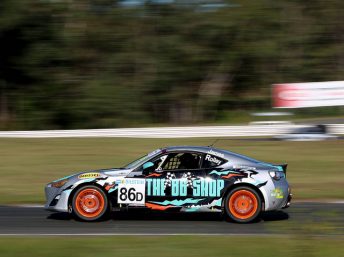 The Oracle Motor Sport Toyota GT86 and its co-owners/drivers Michael James and Troy Rolley will make their APC, Shannons Nationals and night racing debuts at Queensland Raceway this weekend (August 4-6).

James – not to be confused with the Best Jet Holden VE APC competitor of the same name – and Rolley will compete in Class D in what is round four of the 2017 Australian Production Cars season this weekend with the support of ‘The 86 Shop.’

“We are super excited to be racing under lights – neither Troy or myself have ever raced under lights before,” James explained.

“For us, I think one of the bigger challenges when it comes to the night racing will be not knowing what car is behind us as we will only be able to see their lights – knowing when to protect our position or when to yield to a faster car will certainly be keeping our spotters on the ball!

“We certainly expect to be competitive in Class D and to come away with a car that is still in one piece.

“In the state competition, we have the quickest Class D car in the field, so we are looking forward to seeing where we stand with others from further afield as we step up to the national category.”

While no plans are yet finalised past their debut this weekend on the national scene, James states that there is certainly a desire to compete in future APC events in the future – including the infamous Hi-Tec Oils Bathurst 6 Hour.

“We are super excited to be part of the Shannon Nationals for the first time this weekend,” James said.

“We have a few of the races in our bucket list – at this stage we are not sure if we will make it to more this year but next year we want to get to Bathurst, Philip Island and probably Sydney Motorsport Park, as well as the Queensland round.

“This weekend, it is not only our first Shannons Nationals event, first APC event and first night racing experience, it will also mark the longest distance that Troy or myself have ever raced, so we see it as an important stepping stone towards the goal of joining the APC at the Bathurst 6 Hour in 2018, that is for sure.”

This weekend’s APC debut comes after a busy period of car prep for the 86, following significant damage incurred recently.

“This race will be the first since an altercation with a wall whilst racing with the Queensland Production Touring Cars around five weeks ago at Lakeside – the whole left-hand side has been replaced but it is looking spot on and we are raring to go,” James said.

“We will be at a power disadvantage to the big cars at QR but our corner speed and braking ability will hopefully keep us in touch. The QR circuit is notoriously hard on brakes and favours the high-powered cars, but we will be out there giving it a red hot go!

“With Troy and I co-owning the car, we have a great understanding of each other’s ability. Generally, we are pretty close in our lap times and enjoy the challenge of getting our little car around the track as fast as we can push it. We have a fantastic team of people in the pits keeping the car running perfectly and making sure we don’t forget to have a laugh along the way as well, so I am sure we will have a great weekend no matter what comes.”

James and Rolley will be one of a 25-plus field of cars taking part in round four of the 2017 APC at Queensland Raceway across August 4-6, with the event to feature two x 300km races, including the infamous ‘Fight in the Night’ under lights race on Saturday evening. Spectator access on Friday is free, and only $20 for Saturday or #30 for Sunday admission – a weekend pass is also available for $40.00. All of Sunday’s action will be streamed online live and free via thenationals.com.au