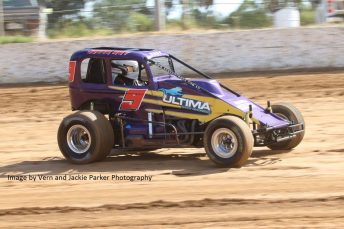 This Saturday night Rushworth Speedway is headlined by two big Open Wheel categories with the annual Legends Cup for SDAV Hot Rods and the Victorian Sprintcar Association ready to put on a show for Goulburn Valley motorsport fans.

The Sprintcars are the Formula 1 of dirt track racing and after a recent showing at Wangaratta Speedway the Sprintcars are riding on a wave of enthusiastic interest from competitors interested in the class.

Most of the competitors at the moment come from Gippsland and it is Bobby Daly, Shane Steenholdt, Matt Symons, Adam Greenwood and Mark Laity who from the entry list stand out as those most likely to figure in the finish vying for the chequered flag acknowledgement of finishing first. The cars have been exceptionally quick lately and it is possibly lap records might be under threat once again at Rushworth.

In Hot Rod racing, Jason May, Jamie May, Russell Hovey and Stan Marco are amongst the competition in this coveted race that honours past Legends of the SDAV Hot Rod division. The new Victorian Champion Jason May is the man most likely whilst Shannon Meakins has been strong and out of luck this season and this could just be his time to shine.

Club Sedan racing battles continue through each and every class as usual starting with the Phil Lamb versus Adam Box battle in the Open Saloons. The end of season race events often dish up fresh new winners for the season, could it be Peter Welch’s turn or perhaps a second victory for Mark Cecil in the season?

Time is running out for Leigh Jeffery to make a stand in Production Sedans this season. The division has been tightly contested all season long with the likes of Geoff Lee, Wayne O’Keefe and Shane Hutchins figuring more than most in the results, Jeffery is keen to round out the season showing why he was the top dog last year.

In Ladies action Chloe Lamb and Jacquie Fitzpatrick are hard to look past when you see their consistent one – two finishes on paper. However the girls that have been following them to the finish line have been close throughout the season with each other and it just might be time for one of them to break out and get amongst the top two.

Finally Tristan McGraw fresh off a win is keen to get to battle with Josh Cecil and Lachie Fitzpatrick this weekend in Junior Sedans. The latter two have most of the victories this season however a win last meeting to McGraw is sure to give him new found confidence to mix it up with the top two.