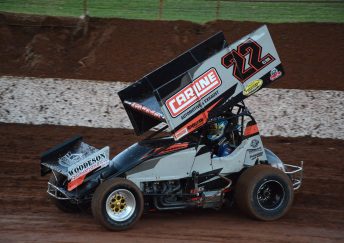 If open wheel dirt track racing is what you like, then Ausdeck Patios Archerfield Speedway is where you need to be this Saturday night (May 13) for an exclusively open wheel program that includes round 14 of the East Coast Logistics Sprintcar Track Championship and the annual 50-lap Midget marathon, plus Wingless Sprints, Lightning Sprints and Microsprints. Although the season is winding down with only two more rounds remaining, the ECL Sprintcar Track Championship is a long way from being resolved with Andrew Scheuerle clinging to an 11-point lead over Luke Oldfield, while Peter Lack lurks just 46 points further back in third overall.

Having won the last two rounds and three of the last four (with Scheurele taking the other), Oldfield has been steadily narrowing the deficit in the point standings and now sits poised to deny Scheurele consecutive track championship titles should the series leader falter. The problem for Oldfield though is that Scheurele possesses a wealth of experience and is unlikely to succumb to the pressure, setting the scene for a sensational night of this weekend and again in the final round of competition on May 27. Another very strong line-up of 30 drivers has been secured for the event and nobody in the field is going to show any mercy to Scheuerle or Oldfield in their fight for the championship. In fact, the two contenders no doubt expect their opponents to be make every effort in upstage them and deny them another appearance on the feature race podium. Of course, intent and execution are two very different beasts and it is going to take more than just desire and determination to take out the 30-lap feature event and, as such, it will be very interesting to see if anybody has the mettle to upstage the series leaders.

Of the challengers, Brent Kratzmann brings some good form into battle, finishing on the podium at the previous round and running fourth overall in the championship, while two-time national champ Dave Murcott, having made an early exit from the previous round, will be looking to bounce back in a big way. Also in the mix will be Callum Walker, Ben Hilder, Kevin Titman, Cody Maroske and Mick Sauer, while a couple of very interesting nominations are Australian Dirt Modified champion Kevin Britten and four-time national Midget champion Adam Clarke. Britten has contested a few Sprintcar shows this season in between Dirt Modified commitments and while Clarke has competed in Sprintcars previously with some success, his Polar Ice team are making their first foray into the V8 ranks.

The Midget 50-lapper always provides plenty of interest for speedway purists as it harks back to the glory days of Midget racing in Australia when such events were perhaps more common place than they are now. As such, there is always plenty of prestige associated with winning such an event and this Saturday will be no exception when set-up, preparation and patience play just as big a role as skill and speed. Whilst Troy Ware should be bristling with confidence following his win in the Danny Davidson Memorial, the likes of Brock Dean, Rusty Whittaker and Darren Vine have been in terrific form all season. Throw second-generation NSW teenager Kaiden Brown into the mix, add some Brendan Palmer and Scott Farmer, along with a pinch of international flavour courtesy of New Zealander Chris Gwilliam and you have the ingredients for some pretty tasty competition. There are 19 drivers nominated for the event, all of whom want to emerge as the marathon master at the end of 50 gruelling laps.

Having taken out the New South Wales Wingless Sprint Championship just a few weeks ago, Adam Butler returns to his home track hoping to wrap up his Queensland season with another feature race win. However, Glenn Wright is fresh from a feature win at Kingaroy last weekend and young Cody O’Connell collected a feature win here at Archerfield earlier in the season, so it seems likely that this trio be at the forefront of the final round of the Wingless Sprint Club Championship on Saturday night.

Microsprints have struggled for numbers for the last few seasons so the addition of three interstate cars this weekend is a welcome boost that will see 14 cars face the starter in their events. Shane Munro, Dave Gwin and Connor McCullogh seem the locals most likely to set the pace, while the NSW-based trio of Jake Marchant, Jason Summers and former Lightning Sprint racer Peter Challen will no doubt be gunning for a sweep of the podium.

Lightning Sprints will complete an entirely open wheel program, with gates opening at 4.00pm and early racing from 4.45pm. The main program, featuring round 14 of the East Coast Logistics Sprintcar Track Championship and the Midget 50-lapper, gets underway at 6.00pm.