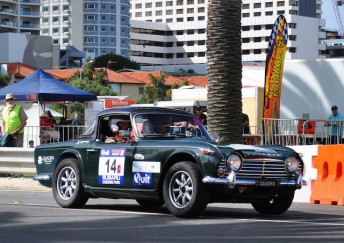 MEDIA RELEASE: There is one week to go until Forrest Place fills with performance, exotic and classic vehicles taking part in the 2016 Quit Targa West tarmac rally, which runs from August 11 to 14.

Over 60 vehicles will be on display from 11am on Thursday August 11, available for the lunchtime city crowd to peruse before being waved off at 2pm to begin the four day rally.

The Quit Targa West entry list breaks new ground this year with the first-ever entry of an electric car. The BMW I3 driven by Joseph Law and Alex Butler will compete on its 125kw electric engine, and use the petrol extender motor to recharge during liaison. The car will be serviced by the MTA apprentices who work with the GTI Racing team, giving them an opportunity to learn about new technologies.

The entry list also features plenty of success stories in the national tarmac rally scene, including a five-time Targa Tasmania winning Lamborghini Gallardo Superleggera, which has been loaned by its east-coast owner to WA rally regular John O’Dowd.

“This car has done really well in a few events on the East Coast including Targa Tasmania and Targa High Country,” said O’Dowd. “So it’s good to get it to Western Australia and let the public have a look at it, listen to it and see it in action.”

By O’Dowd’s side in the Gallardo will be experienced Western Australian rally co-driver Ben Searcy.

“Ben co-drives for me on the gravel and he’s fantastic. He’s very good with the notes and very professional in what he does. 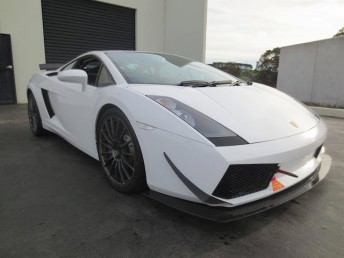 “We’re not going to get much time in the car before the event, it’s going to be a learning curve to drive something like this.

“The whole strategy is just to get out there and see how we go while having some fun – I don’t think by any stretch of the imagination we’ll be winning the event.”

By the time O’Dowd and Searcy cross the event’s finish line on Sunday August 14, they will have travelled an overall length of 921 kilometres, and completed 239 competitive kilometres through Wanneroo, Malaga, Whiteman Park, Kalamunda, Toodyay, Lower Chittering, Bullsbrook and Perth City. The 34 tarmac rally stages cover a range of conditions from tight city sprints to fast flowing open roads.

“I think the car will be the most suited to the Kalamunda stage and the Bullsbrook stages,” said O’Dowd. “I’m not sure of the turning circle, so the Zig Zag is a bit of an unknown – might even be a three point turn or two on some of that!”

The Quit Targa West has five different competition categories which include both Competitive and the speed limited Challenge category for modern vehicles and classic vehicles, plus a Rookie segment.

O’Dowd’s fellow State rally competitor Bob Fisher is at the helm of one of the Classic category vehicles that is also doing very well for itself on the national tarmac rally circuits. Fisher with daughter Louise Paul achieved class runner-up in their 1967 Triumph TR4A at last year’s Targa Tasmania. This will be the team’s fourth Quit Targa West.

“I bought the Triumph four years ago from the UK and I completely refitted it mechanically. I converted it to be purely a competition vehicle but to ensure none of the car’s integrity was lost, all the major mechanical items such as the engine and cooling system has been kept. 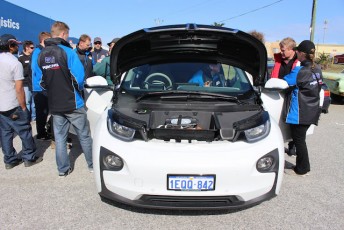 The first ever electric vehicle to compete in the Quit Targa West. Driven by Joseph Law and Alex Butler. pic: GTi Racing

“Rallying is becoming more about the big V8s and the hot cars, but I love my little Triumph and it gets good results – she goes pretty quick around the corners and that’s good enough for me.

“I chose this car because of the affection I have for the older classic cars but we’ve taken the car to the point where she is very robust, very strong and very perky. She’s now a racing car – you wouldn’t take her on picnics anymore!

“We’d love to have some more competition in the Early Classics class. Converting these types of vehicles to rally spec isn’t as expensive as most people think.”

There will be plenty of opportunity for spectators to see the cars in action for free, from the designated viewing points set-up on each stage. The Spectator Guide, detailing where the points are and the times the cars will be coming past can be downloaded from the Quit Targa West website www.targawest.com.au. Thursday, 11th August: 11am to 2pm – Ceremonial Start, Forrest Place, Perth CBD (Rally action can be seen in Wanneroo and Malaga between 2pm to 8pm).

Saturday, 13th August: 9am to 5pm – Rally action can be seen in Toodyay, Lower Chittering and Bullsbrook.